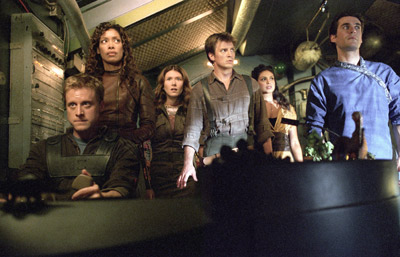 Earning critical acclaim but not enough of a Nielsen rating to support its cost, the sci-fi western "Firefly" lasted less than a season on Fox back in 2003. That would have been it, were it not for the show's tenacious creator, Joss Whedon, who refused to take cancellation for an answer.

Despite discouraging words from all sides, "I was not done telling this story," says the man behind the successful "Buffy the Vampire Slayer" and "Angel" TV franchises. As it turned out, loyal fans of the series -- dubbed the Browncoats after the garment worn by "Serenity" captain Malcolm Reynolds (Nathan Fillion) -- weren't done either. A groundswell of grassroots support kept Whedon's dream alive. Sales topping 200,000 copies of the DVD box set made Universal Pictures take notice and greenlight a film version as Whedon's feature directorial debut, with the entire TV cast intact.

The story, which takes place several months after the last episode in the series, was the easy part. Though including nine "Firefly" characters plus two new ones (played by Chiwetel Ejiofor and David Krumholtz) was a challenge for Whedon, it wasn't as complex as opening up the action for the big screen, making it fun and accessible to unfamiliar viewers while pleasing the faithful, and doing it all for under $45 million. We spoke to Joss Whedon and other members of the cast and crew of "Serenity" to learn how they did it.

In this article, we'll look at the special effects that went into making "Serenity" real, as well as weapons, armor, costumes and characters.