Browse the article How IMAX Works 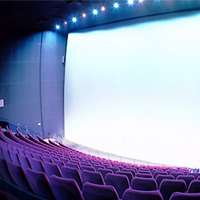 If you have ever been to an IMAX theater and seen an IMAX movie, then you know that IMAX is an experience -- a much different experience than you get in a normal theater. IMAX is so different and so unique that it is nearly a genre of its own.

In this article, we'll look at both the technology and the process of IMAX. The technology includes the theaters themselves and the projectors, while the process involves the steps that a production company must go through to create an IMAX film. We'll interview Michael Lewis, who has co-produced the IMAX film "T-REX: Back to the Cretaceous," and produced and financed "Siegfried and Roy: The Magic Box," two of the most popular IMAX films ever created, to learn about the special challenges of this amazing medium!

Layout of an IMAX dome

As soon as you walk into an IMAX theater, the difference in this format is immediately obvious -- the screen is gigantic! There are two different types:

Whether you are in a theater or a dome, the effect is amazing. The screen is large enough to fill your field of vision. By doing this, the screen gives you an incredible feeling of immersion (there is nothing outside the film to distract your attention), and it also enhances the feeling of motion. In fact, the feeling of motion is so strong that it makes some people ill.

In order to fill this gigantic screen with a clear picture, IMAX films are shot and printed on huge film stock that is completely unique in the industry.

Most films that you see in a theater come in a 35-millimeter format. The frame is 35 millimeters wide, and nearly square. But movie screens are not square -- they are very wide for their height. So the wide image is compressed into the 35-millimeter frame and expanded by the projector to fill the screen.

Some theater films come in a 70-millimeter format. This format provides roughly double the resolution, and the frame is naturally the width of the screen so there is no compression.

IMAX film is called the 15/70 film format. Each frame is 70 millimeters high and 15 perforations wide. In other words, the film size is about 10 times bigger than standard 35-millimeter film. This film size gives an IMAX movie incredible clarity, even on the huge screens in IMAX theaters.

The 15/70 film size makes an IMAX projector a truly unique device. If you have read How Movie Projectors Work, you understand the basic mechanism of a 35mm projector:

In an IMAX projector, the film is so heavy and large that a projector cannot use a claw to move it, and it is hard to hold such a big film frame perfectly flat with respect to the lens. Therefore, an IMAX projector is completely different from a normal projector:

All of this advanced technology means that an IMAX projector weighs over 2 tons (1,800 kilograms) -- the equivalent of a small car! That's what it takes to get such a bright, clear image onto such a tremendous screen.

Since its debut, IMAX has been pushing the envelope to create the most realistic, immersive film experience possible. Several of the innovations introduced in select IMAX theaters include:

By combining all of these advanced features, IMAX theaters create the most realistic and intense movie experience around.

Both of these films are especially interesting from a production standpoint. Not only are the films shot on IMAX's 15/70 film stock, but they are also shot in 3-D and make extensive use of computer-generated (CG) effects.

According to Lewis, one of the key challenges when making any IMAX film has to do with the film size. The size of the film means three things to a director:

According to Lewis, "The cost and complexity in every segment of physical production is an order of magnitude greater with IMAX." In addition, "There are only two IMAX 3-D cameras in the world, so if you have a breakdown, you are standing around spending $100,000 a day on production costs."

On a normal film, 10 setups a day is normal. With IMAX, "Three or four a day is moving at lightspeed", according to Lewis. The camera is also very noisy -- it sounds like a chain saw when it is running. Actors and crew are all affected by the noise. In "Siegfried and Roy," the animals also reacted to the noise. All of the audio has to be done in post-production because of the camera's noise on the set.

Animals react to the noise and excitement at movie shoots.
Photo courtesy IMAX

The screen size and clarity mean that every frame of an IMAX film must be perfect. "In 35 millimeter, you can use lots of cheats in visual effects -- things like rain and darkness," says Michael Lewis. "In IMAX you see everything, and everything is photo-real. There are 100+ IMAX screens in museums, so things must be as accurate as possible. With a dinosaur, you have to worry about things like nostril slant and tooth decay. When placing a dinosaur on the ground, the eye instantly knows if something is not perfect."

The technical challenges mean that an IMAX film, which is normally just 40 or 50 minutes long, costs just as much to make as a normal film for theatrical release. For example, the "T-REX" film took five months for a feasibility study to prepare for filming, 40 days for the shoot and then 12 to 13 months to complete the film in post-production. The CG effects and dinosaurs consumed approximately 4 terabytes of disk space.

A typical IMAX film's production costs fall somewhere in the range of $3 million to $8 million for a 2-D feature, and $8 million to $15 million for 3-D, with 3-D films involving CG running at the high end of the scale. Films can either be funded by IMAX or self-funded by studios like Michael Lewis' L-Squared Entertainment.

Despite the challenges, the unique experience of the IMAX theater makes IMAX films a compelling medium for directors. With the number of theaters increasing worldwide, and with a rapidly growing audience for the IMAX experience, it is likely that a wide variety of films will be created for this venue in the years to come.

For more information on IMAX and related topics, check out the links on the next page.