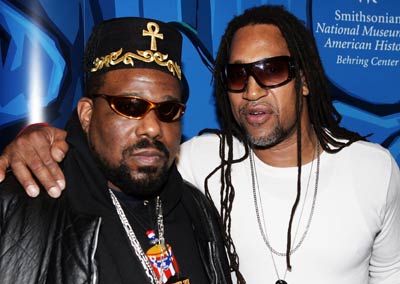 Scott Gries/Getty Images
Hip hop pioneers Afrika Bambaataa (L) and Kool Herc pose for a photo during a press conference to announce the launch of The Smithsonian's Hip-Hop Won Stop: The Beat, The Rhymes, The Life in 2006

To consider hip-hop's birth, something most folks would agree happened in the streets of New York, you first have to look at the paths of several musical styles and genres -- sort of like a musical family tree. Hip-hop's roots can be found in a variety of African-influenced musical styles. African-American gospel, folk, blues, jazz and R&B music each take a limb on the tree, as do calypso, salsa, soca, ska, reggae and other Afro-Caribbean styles.

The p­ath that leads to the birth of hip-hop isn't linear -- instead, it zigzags back and forth, here and there, ultimately ending up in the South Bronx neighborhood of New York. A rough outline of events goes something like this: Slaves transported from West African countries to North and South America brought with them various oral and musical traditions. These traditions became integral to the use of music as a form of resistance and rebellion. West African religious drumming met with storytelling and griotism (an oral tradition of maintaining and passing along important familial and local histories through poetry and music) to create spirituals and ballads. Call and response between congregation and minister moved beyond the church and into music. In time, jazz, blues and folk music permeated the southern United States. Bebop and, eventually, doo-wop music hit the airways. They, American jazz, blues and R&B all made their way to the Caribbean during World War II, when American soldiers were stationed in Jamaica.

Meanwhile, in Jamaica and many other Caribbean regions, disc jockeys (DJs) with large, portable sound systems would set up temporary discos in rented buildings or out in the streets. The market for these roaming dance clubs was fiercely competitive. DJs started devising ways to one-up their rivals; one common practice was toasting. Toasting involved either improvised or scripted talking while a song was playing. Sometimes the commentary included barbs or jabs at rival DJs.

This practice eventually led to two new types of reggae music: talk over and dub [source: Hebdige]. Talk-over tracks were recordings of DJs toasting a particular tune. Dubs were even more doctored renditions of songs. They included both talk-over and sound effects, such as echo effects, reverb and intensified bass and treble. Many artists started placing a dub version on the b-side of their 45s. These dub versions were usually mostly instrumental with some song lyrics and talk-over commentary.

So how does all of this lead to hip-hop? The answer is in the history of a young Jamaican émigré named Clive Campbell. In 1967, 13-year-old Campbell moved from Jamaica to the West Bronx neighborhood of New York [source: Gross]. He brought with him knowledge of the mobile discos, toasting DJs, and talk-over and dub records of his birthplace. That knowledge combined with a powerful sound system helped Campbell -- a.k.a. Kool Herc -- lay the foundation of the hip-hop movement.

But before we talk about Herc's turn at the turntables, let's take a look at something else that he spent time doing after moving to New York -- tagging.