The Half-Blood Prince and Beyond 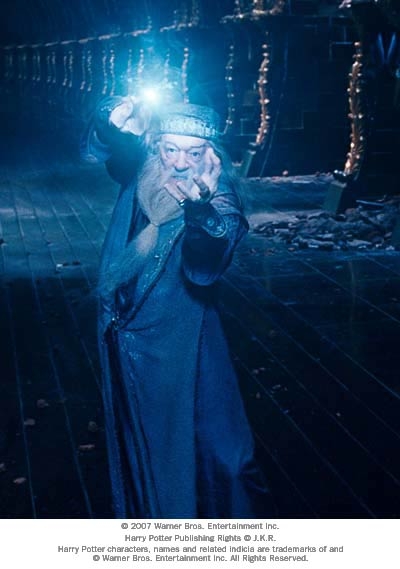 Michael Gambon as Albus Dumbledore in Warner Bros. Pictures' fantasy "Harry Potter and the Order of the Phoenix."

Richardson and his colleagues are currently in pre-production on the sixth film in the series, "Harry Potter and the Half-Blood Prince."

"The script is still going through that evolving stage where we're trying to sort out what's in and what's out and how to do everything. There's going to be a lot of effects, both practical and visual," Richardson assures. "I think the main problems for us are going to be in the sequence at the end where Dumbledore and Harry go into the underground cavern."

Heyman counts that scene and a battle at Hogwarts among the sixth film's challenges. "This one is a little more comedic and at the same time find out a little bit more about Voldemort. Finding a young Voldemort will be challenging." As for Dudman's assignments, "A lot of it is up in the air, but we know we'll have a giant dead spider to produce."

Filming starts in September, with a shorter preparation and shooting schedule than "Harry Potter and the Order of the Phoenix." had. Yates will once again direct. "I've got a year less on the next one but I've gotten used to the world now so it's a bit easier," he figures. It's due for release in November 2008, and "Harry Potter and the Deathly Hallows" will follow in 2010.

By then, most of the creators involved will have spent more than a decade of their lives working on Potter films. "I'll be incredibly sad when it ends because it's a very close-knit community here, people enjoy each other and work together -- it's like a family. I've seen Dan and Rupert and Emma and the other kids grow from age 10 or 11 and that's been a fantastic thing to see," comments Heyman. "I feel blessed. "But I'm looking forward to filling the void with other things."

A producer on the December Will Smith vampire flick "I Am Legend," Heyman's currently making "The Boy in the Striped Pajamas," "about the relationship between the son of a commandant in a concentration camp and a boy on the other side of the fence."

Richardson, who likens his long Potter run to "almost having a proper job," finds it "really nice to have that continuity of work, to be asked back that often." A veteran of films like "Aliens," "Rollerball," and several in the James Bond franchise, he followed his father into the special effects field. "I worked on pictures like "Exodus" and "Lawrence of Arabia" with him while I was still in school. Now my son's working with me on the "Harry Potter films"," he notes. Post-Potter, "I hope that I will be in a position where I can pick and choose a little bit more."

Similarly, Dudman has felt like less of a freelancer working in Potter-world and will also miss much about it, including relationships and his workshop. "But it can also be very refreshing to tackle something completely different," he says, mentioning a musical, anything shooting outside England, "or something with an awful lot of blood in it."

The latter is not surprising, considering that Dudman's sideline is manufacturing non-staining theatrical blood. "There are several formulas for blood that people have used over the years. We tinkered with one a bit and found that if you took certain things out of the old recipe it stopped staining. I started making it and then so many people asked for it that we made it on a larger scale," he explains.

His company, Pigs Might Fly, references the fantasy aspect of his vocation, which makes the impossible possible "but with an air of silliness that's very important. In this job, we laugh that we get paid to do this."

For more information on Harry Potter and related topics, check out the links on the following page.