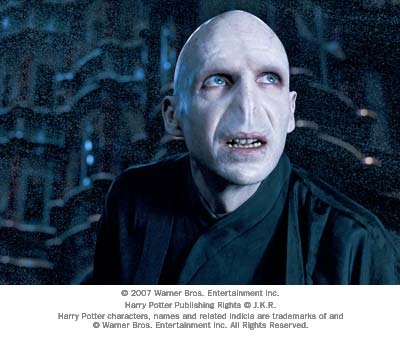 Ralph Fiennes as Lord Voldemort in Warner Bros. Pictures' fantasy "Harry Potter and the Order of the Phoenix."

All prosthetic makeup fell under Dudman's purview, as well as "organic props" including Death Eater masks and a moving potted plant. "We did Mad-Eye Moody, a major multi-piece silicone prosthetic makeup for Brendan Gleeson, with an animatronic, radio-controlled eye. Also we do Voldemort. Although Ralph Fiennes' nose is removed digitally, everything else on him is real so we do prosthetic pieces for his forehead, take out his eyebrows, cover all visible skin with a network of transferred veins, which are done on a temporary tattoo system. It's printed out on a computer so we can line them all up identically every day."

That process took four hours, while the Mad-Eye prosthetic was a two-and-a-half-hour job. "If an actor is well known, his contract usually stipulates the hours he can work and that limits the time in makeup," Dudman points out. "So at the beginning I spend time thinking about how we can get that time down. We could have airbrushed the veins on Voldemort every day but it would have taken a long time. Instead, we airbrushed them onto a model, photographed the veins and scanned them into a computer where we could map them, have them printed out with codes on them and then we could put these temporary tattoos on every day and match them up. It knocked two hours off the makeup."

In turn, that saved money. None of the interviewees would comment on the budget, which was rumored to be in the $150 million range, and was somewhat affected by the dollar-pound exchange rate. "We don't cut corners," says David Heyman, but he does find ways to spend sensibly. "Often a scene becomes stronger because you're forced to analyze it and get it down to its essence and look at the ways you can get more bang for the buck."

For example, John Richardson says, "We can pull something across the set with a wire whereas if somebody does it with a computer, it's several weeks' work, so in some cases it's a lot cheaper for us to do it."

Nick Dudman benefited from a unique source of input: children who visited his museum-like workshop on tours of Leavesden Studios. "I'm very happy to say to kids, 'What do you think? Does that look like a Thestral to you?' It's actually a pretty good idea to bring somebody in who has no idea of the process at all, especially at the sculpting stage. They see it with a completely fresh eye. We're so immersed in it that we might have missed something very basic."

Having his workshop on-site at Leavesden also means easy access to the set and director Yates. "He'll come in three or four times a week and look at stuff. You change what he wants and show it to him again later. It's a process of evolution, which means you're constantly checking and being checked."