Bringing Grawp and Other Creatures to Life 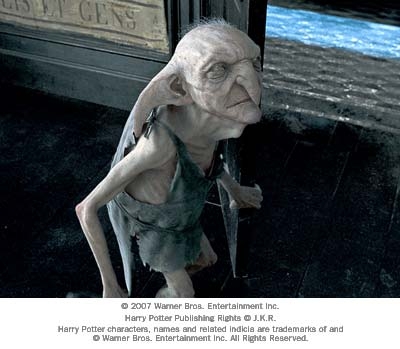 Kreacher the house elf from Warner Bros. Pictures' fantasy "Harry Potter and the Order of the Phoenix."

Of the film's many complicated elements, one of the most complex was creating the 16-foot giant Grawp, Hagrid's simpleton half-brother. "We spent a year on him. It took us a long time to get it right," confides Yates. In the end, Grawp was a collaboration between the Creature Effects and Visual Effects departments, starting with a sculpted giant head.

"Doing the whole body at 16 feet would have been a nightmare. But with a full-size head, you can use real hair and get the detail you want, like eyes, eyebrows, veins," explains creature supervisor Nick Dudman. "Then the director can decide if he likes it before it's passed on to the effects house, where it gets expensive. It makes economic sense, and everyone knows what it will look like."

Like his colleagues, Dudman, who has worked his way up from makeup artist on the first "Harry Potter" movie to department head, has seen changes brought on by more powerful computers. "With the digital revolution, things that we used to do full scale or as big animatronic things, we don't do anymore. We tend to do a lot more CG model work," sculpting and painting a creature for lighting reference and scanning at a digital effects house. "I use fewer engineers and more painters and sculptors now," he notes. On "Harry Potter and the Order of the Phoenix," his crew numbered 55.

His responsibilities, which included creature development and prosthetic makeup, pick up where the art department leaves off. "The concept designs are then passed to me and I have to turn them into three-dimensional objects. We usually start small scale with tabletop models, usually a range of those for a given creature, and then everyone can sit 'round an object and complain about it until it's changed to a point where everyone stops complaining. Then you scale it up and turn it over to Effects."

Dudman faced many tricky tasks including getting the "heavy but delicate" Grawp head, which measured 4 feet six inches by 3 feet six inches, onto the set, "taking something that involved so much work, putting it in an environment of the set and trying to winch it into the ceiling without it being damaged."

Another challenge was creating the Thestrals, dark creatures that can only be seen by those who've seen death. They're translucent black, very difficult to reproduce on film. "You can't just paint the thing black because it will look dull. You've got to put a color scheme into it. It can't be so dark so you can't see it clearly," Dudman explains. "It's the subtleties that make something look real."

Dudman's team was also responsible for providing on-set representation of CGI creatures. "You can't just expect the kids to act to fresh air," he says, and that meant going beyond "a ball on a stick for the eye line." For Grawp, "We put a puppeteer in a blue suit in a blue rig that took him up to 16 feet and he could work these giant arms as well. That also let us know how far Grawp's arm will reach when you block the scene."

The unique creatures within "Harry Potter and the Order of the Phoenix" posed several challenges. "Technically, the thing that was most challenging was getting the right fur on the Centaurs," says Dudman. "We wanted the pelt to be the gleamy, sweaty coat that you get on a thoroughbred racehorse. To duplicate that artificially was incredibly difficult." But before it got to that stage, the Centaur model went through several revisions, changing proportions based on how the creature would move. "My job is to keep the concept artist happy so that the aesthetic of the original design is preserved, but also I've got to keep the visual effects department happy and I've got to satisfy what the director and producers want," Dudman notes.