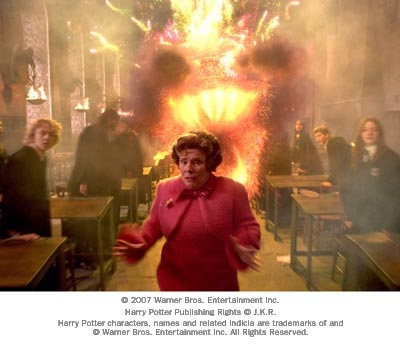 Special effects used in Warner Bros. Pictures' fantasy "Harry Potter and the Order of the Phoenix."

Richardson, who has worked on every "Harry Potter" film, says technological advances like faster computer processors make some effects possible that could not have been attempted during the first or second "Harry Potter" movies, and he offers the Hall of Prophecies battle as an example. "Visual Effects can do better things, more realistic things. We had CG characters since the beginning, but the bar has been raised since then. I think the broomstick flying is better now than in the first film," says Richardson.

"We've improved all of our mechanics, electronics, and all of the rigs that we build are now operated by computers," he continues. "A lot of what we do is fairly complex hydraulic rigs. But we have the ability now to operate and control those by a computer, which gives us a much better interface with the Visual Effects guys and the CG work that they're doing so that we can ensure that the real world marries up pretty seamlessly with the computer world."

This means a lot of shooting against blue or green screen, "in some cases to create the environment or the set and in other cases, if you're flying somebody on a broomstick you've got to fly them in front of a blue screen and put them into the CG environment later."

Speaking of those aerial sweepers, Richardson reveals that they've been adapted to the maturing cast. "When we first designed the broomstick flying rigs they were designed for kids of 100, 120 pounds and now they're almost double that weight. We've had to almost completely redesign everything, and make sure that mechanically they're strong enough."

One of Richardson's responsibilities is preparing and shooting elements for the Visual Effects team to manipulate later, and on "Harry Potter and the Order of the Phoenix" this included myriad spell effects in the Room of Requirement and creating a sphere of water in which Dumbledore's spell traps Voldemort.

Evanna Lynch as Luna Lovegood in Warner Bros. Pictures' fantasy "Harry Potter and the Order of the Phoenix."

"We had to come up with a way of holding Voldemort in the air and spinning him so that he looked as though he was floating in a sphere of water. To do that, I used a modified broomstick rig, which was hydraulically operated, but we could program it in the computer and we could sit Ralph Fiennes on it. We got two-meter diameter Plexiglas® spheres and projected water over the top of them and inside of them to create the look of a moving sphere," he outlines.

In another scene, "We had to blow out 250 curved glass windows in the Ministry of Magic at the same time, as if Voldemort's spell was creating enough power to make them shatter. It had to work on the first take and it did," Richardson says with relief. "We're getting better at it. We get it to work the first time most of the time these days."

Minors on the Set

The young cast mandates certain considerations, says Richardson. "Working with children you have to be very careful when you're doing fire effects and explosion effects. You have to be 110 percent sure of what you're doing and make sure that nothing can go wrong. So everything is meticulously planned and worked out because safety is obviously a major issue."

But he's quick to add that the kid actors have "always been great, up for whatever we asked them to do and very helpful in terms of getting on broomstick rigs, flying and being thrown about covered in water and having flamethrowers blasting about them. They've always been much more professional than you'd expect a bunch of kids to be."