Working as a Film Composer 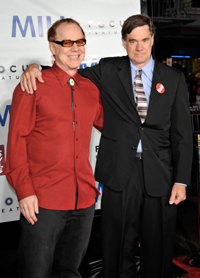 Film composer Danny Elfman, left, taught himself how to write music for films. He is at the premiere of "Milk" with director Gus Van Sant.
© Kevin Winter/Getty Images

In the days when the major studios ruled Hollywood, working as a film composer meant working as a studio employee. Film composers were expected to be able to work in a variety of styles and had months to complete the score for a film. In fact, the film music composer often didn't even enter the filmmaking process until an edited first cut of the film was available.

Today, most movie music composers work as independents -- and have far less time to complete a score, often two months or less to produce and record an hour of music. Digital technology and temp tracks allow filming, editing and music composition to overlap.

Technology helps on the composing side, too. Electronic systems have, for example, eliminated the need for a composer to do musical notation by hand or to copy out each instrument's part from the complete score. But, as in other industries, labor-saving technology has increased demands for speedier work turn-around.

Film composers have to be creative and practical artists, solid musicians who also are adept with music and audio mixing technology. Film composer Cody Westheimer has a studio in a Los Angeles guesthouse. Here's the set-up he works with:

The number of film composers far outnumbers the number of film scoring jobs. So out on their own, movie music composers also have to be masters of other skills, such as business and marketing. For indie composer Robert Toteras, that means spending only 50 percent of his time on music ­­and the rest on hustling up work. The most important things in his business, he says, are the Internet and lists of new and old clients [source: FilmIndependent.org].

Moving up through the film industry takes time and contacts and flexibility. Along the way, that may mean pursuing jobs other than feature films. Westheimer, for example, has scored video games, university educational programs, commercials, short films, film trailers and documentaries. He started with student films at the University of Southern California.

Does film composing sound like a career you'd like to pursue? Keep reading to find out how to get started.