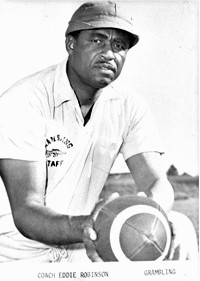 Eddie Robinson sent more than  200 players into the NFL in  his 56 years. See more pictures of famous football players.

"I would like to be remembered as a guy who made the same contributions Bryant did, who influenced people's lives and made an impact on the game."

For a coach with such a stellar record -- he retired in 1997 with a career record of 408-165-15 -- it was undoubtedly Robinson's ability to exert a positive influence on his players that lasted long after the numbers were taken down from the scoreboard.

A superb teacher of football, Robinson was an even greater teacher of life.

"When I left Grambling," Doug Williams, Washington's winning quarterback in Super Bowl XXII, said, "I felt like I had a degree in philosophy. It is amazing what that man knows, in addition to all the football he teaches."

Hall of Famer Willie Davis remembered: "Whether Eddie was coming through the dormitory checking on your work habits or getting athletes out to class, this thing was extremely important to him. He was always someone you could go to to discuss a personal problem and come away with the feeling you'd been with someone who showed sensitivity and understanding."

Robinson first came to Grambling in 1941 as head football (and basketball) coach for a salary of $63.75 a month. Over the years, he sent many players on to the NFL, including four members of the Pro Football Hall of Fame.

Those whose football ended with their final college game all agree they were better for having played for Robinson.

Robinson was a hands-on coach who always cared about his players' whole college experience, not just the time spent on the football field. By the end of his 56-year tenure, he'd sent more than 200 players into the NFL.