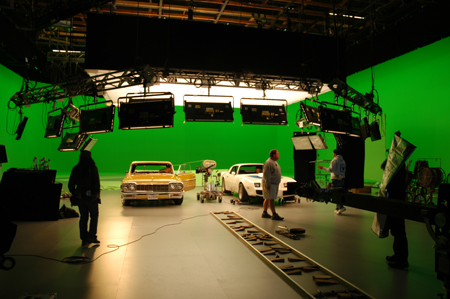 Some cast members adapted to the green screen process more easily than others, reports Peristere, who directed or worked closely with the directors on those sequences. "You have to give them a little driving coaching. When you're on the road it's never straight and narrow, it's always bumpy and fluid. The wheel has little give and you're constantly correcting for the road. We also had to teach them that when you drive you're looking six car lengths ahead of you and when things that are happening in their vicinity they have to track with it," he explains. "I'd say, 'Don't forget you're driving a car!'"

Peristere praises Melanie Lynskey, who plays Wendy Pattrakas, a new mom in a minivan on the run from her abusive husband, as "the world's best virtual driver." The former "Two and a Half Men" actress only learned to drive three years ago. "I had a terrible phobia of driving," she admits. "I lived [in L.A.] for four years and took cabs everywhere I went."

A green screen newbie, Kevin Alejandro, who portrays newly-released con Winston Salazar, found the green screen process intimidating at first, "but they've done a really good job of keeping the urgency and talking us through it."

"You get used to it after a while, but it's an acquired skill," reflects Kristin Lehman, who plays the secretive Corinna Wiles. "It's like any improv," adds Michael Hyatt, who as Susan Chamblee is one of three Hurricane Katrina survivors racing together. "We all know how to drive. We just do it on stage."

Their performances and other elements of every scene must perfectly match the footage previously shot on the road. "We have to match everything -- lighting, depth of field, fog, road debris. We have to recreate things like reflections. Everything is choreographed," states Peristere. He uses a 3-D computer program called Maya "to pre-visualize what the sequence will look like. We built in the highway, the cars, the characters, and the camera equipment so this cartoon version will have the same constraints as the camera car on location does. It's like a three-dimensional storyboard that lets us know what's possible so there are no surprises."

However, problems do arise that need to be fixed in post-production. This process takes twice as long as on "Battlestar Galactica," Peristere reports, because it's difficult to simulate real life. On the other hand:

We can shoot 14 pages of dialog a day on a green screen and put these people in unique locations they could never get to because we are able to composite them there. If you were to do those same 14 pages in the real world that would mean two-and-a-half days of photography on a road with tow-rigs all over the United States with closing down roads and transportation and housing and hotels. If you're clicking along to the tune of $100,000 a day and you do two-and-a-half days in one, plus visual effects, you're probably saving 30 percent to 40 percent on those days. It allows us to do more overall. It allows us to be a bigger show and do an eight-day show with the workload of a 10-day show.
Establishing shots, like this one of Hurricane Katrina survivors Leigh (Rochelle Aytes, L), Susan (Michael Hyatt, C) and Ivy (Taryn Manning, R) checking out their flat tire, give "Drive" a sense of realism.
Photo courtesy Michael Desmond/©2007 Fox Broadcasting

However, Peristere continues, "When we need to shoot something very specific we do send a small unit to other parts of the country to take photographs we'll use to create matte paintings. In the first episode we went down to New Orleans during Mardi Gras and in episode three we sent a unit to Georgia. We do those establishing shots so it's clear that we're not in L.A."

Other locations are completely computer-generated, such as the lighthouse destination in the first episode. "A year ago we wouldn't have been able to create a completely CG-environment like that with ultimate photorealism that allows a helicopter to come in and out. You won't see too many of those shots because they're not cheap. But we are using them," says Peristere. "We have another one coming up in episode five where we have a virtual camera flying over Wendy as she's moving through a rural area that we're not able to shoot in."

We'll see how "Drive" competitors are tracked in the next section.