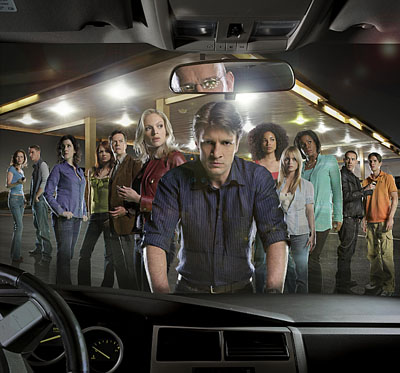 The cast of "Drive".

Combine the adrenaline rush of the Grand Prix with the competitive intensity of a globe-trotting, high-stakes reality show and compelling personal stories and mysteries, and you've got "Drive." This new Fox series follows a diverse group of people coerced into competing in a secret, illegal cross-country road race.

In Hollywood shorthand, what "Lost" is to "Survivor," "Drive" is to "The Amazing Race," but with much higher stakes -- there's a $32 million prize and deadly penalties for some -- and one other major difference. Despite the transcontinental setting, very little mileage is added to the odometers of the motley fleet, which features a Ford Taurus, a '69 Chevy Impala and a dilapidated gardening truck. Nearly all the driving in "Drive" is done on a soundstage, with actors suspended in car rigs in front of a green screen.

"Because of technology, we can actually create a cross-country road race and shoot it all in Santa Clarita," quips Tim Minear ("Firefly," "Serenity," "Wonderfalls," "Angel"), co-creator of the series with Ben Queen. "We've created a whole new way of doing things," adds executive producer Greg Yaitanes. "We've created virtual environments, so we do all the driving without taking the cars and people on the road. One of the signatures of the show involves this car-to-car effect that nobody's ever seen on TV and even in film."

Early on, Minear and Queen turned to Zoic Studios, the special-effects company Minear had worked with on "Firefly," "Serenity," and "Angel." "[Minear] wanted to make it unique, visually interesting, with the essence of '70s car chases married to 2007 technology," says Zoic's Loni Peristere, the visual effects supervisor on "Drive." "It took a while to figure it out," concedes Peristere. "We were asked to come up with a way of photographing computer-generated images that was unique to the series, applying cinematic rules to CGI." And in this real-world setting, there was much less room for error. "It's not spaceships and vampires. Everyone is aware of what driving looks like. It had to look real."

Peristere's team eventually devised what he calls the "Drive" effect, the perspective of "an omniscient camera not visibly bound by rigs and able to move from the open road into a close-up of a character and back out to the road without visibly cutting. The original pilot had an opening that was about seven minutes long without a single cut," he notes. But when the pilot was redone after script and casting changes, the sequence was broken up into six pieces to allow for flashbacks with various characters. "It ended up playing better, even though it was depressing for me," Peristere chuckles. "Still, it uses a technique that's never been done before. It introduces a new kind of photography for the world to see."

"They put cameras all the way around a camera car on the highway to get the environment. These background plates are not just rear-screen projections," Minear points out. "It allows you to move anywhere in a virtual environment. You can move across into moving traffic and then into another car." Obviously, cameras can't pass through windshields, so sequences shot with stuntmen in stunt cars on the open road have to be matched precisely when the action picks up on the green screen stage, and this requires specialized equipment and a lot of planning.

Peristere's photographic arsenal includes the aforementioned "picture car that we can mount cameras all the way around, a Caddy Cam -- a Cadillac Escalade with a jib arm on top of it that can go all the way to the ground or reach above the cars -- and numerous specialized lenses. There are also two or three versions of each race vehicle: "an on-the-road version with tinted windows and an on-the-stage version without any glass that we can move in and out of."

On-stage cars are suspended on air casters to make them easier to move and shoot around.
Photo courtesy Jakris Smittant/Zoic Studios

The on-stage cars are suspended on specially-built rigs he calls air casters. "These are pieces of steel that the cars are elevated on and on the bottom there are little hydrofoils so the cars actually float -- they turn and move really easily. You can push them with your finger," Peristere notes. "This way we can put two cars side-by-side while they're being moved in any direction and we can go back and forth to the actors inside."

In the next section, we'll find out how the "Drive" actors adapted to driving in front of a green screen.