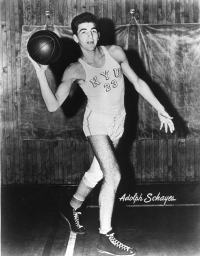 Schayes was rejected by the U.S. Army in 1950 because he was one inch taller than the admissible height of 6’7”. See more pictures of basketball.

Dolph Schayes forged a Hall of Fame career with grit, hustle, and his personal calling card -- the two-handed set shot. One of basketball's first superstars, he joined the pro ranks in 1948 -- one year before the birth of the NBA -- and retired in 1964 after 16 seasons with the Syracuse Nationals. Those who saw him perform say that he was the Larry Bird of his generation.

A 6'8" forward with sensational shooting range, Schayes regularly ranked in the NBA's top 10 in both scoring and rebounding. He gave headaches to opposing defenders because he never stopped moving, with or without the ball. When he got an opening, even if it was 30 feet from the hoop, he'd load up his set shot and send it toward the basket in a high, looping arc.

He also had a running one-hander that he could shoot with either hand, and he was one of the best free-throw shooters in the game. He couldn't jump worth a lick, but he was a crafty rebounder who knew how to play the angles. His greatest asset was his competitiveness. No one worked harder than Dolph Schayes.

Born May 19, 1928, in New York City, Schayes learned how to play basketball in the schoolyards of the Bronx and later played at New York University, within walking distance of his home. Though he averaged just 10.2 points during his college career, Schayes was drafted by two pro teams -- the New York Knicks of the Basketball Association of America and the Tri-Cities Hawks of the National Basketball League.

The Hawks subsequently traded his rights to the Nationals, who then outbid the Knicks for his services. Schayes started out at center, his position at NYU, but soon gravitated to forward, where he could concentrate on scoring and didn't have to worry about guarding behemoths like George Mikan.

After putting up 13.8 points per game during the 1951-1952 season, Schayes joined Mikan on the All-NBA Team, which also included Bob Cousy, Paul Arizin, Bob Davies, and Ed Macauley. Schayes made first-team All-NBA six times in seven years. As a rebounder, he averaged at least 12 a game for 11 straight seasons -- a feat that only Wilt Chamberlain and Bill Russell have ever accomplished.

Schayes's scoring pace accelerated after the advent of the 24-second clock in 1954. He didn't average more than 18 points in any of his first six seasons, but beginning with the 1955-1956 campaign he averaged more than 20 points in six consecutive seasons -- with a peak of 24.9 in 1957-1958. Meanwhile, the Nationals advanced to the NBA Finals three times, losing to the Minneapolis Lakers in 1950 and 1954 and defeating the Fort Wayne Pistons in 1955.

In 1958-1959, the Nationals had an impressive collection of talent, with Schayes, George Yardley, and Johnny Kerr on the front line and Hal Greer and Larry Costello in the backcourt. Unfortunately for Syracuse, Boston had Bill Russell. The Celtics knocked the Nationals out of the playoffs in Game 7 of the Eastern Division finals.

Basketball's original ironman, Schayes played in 706 consecutive games from 1952-1961. Only three players in NBA history have had longer skeins. Schayes's streak ended when he suffered a broken cheekbone, which required surgery, and his career wound down quickly after he suffered a knee injury in the early 1960's.

The Nationals moved to Philadelphia (and changed their name to the 76ers) before the 1963-1964 season, and they hired Schayes to double as player and coach. He lasted just 24 games as a player before quitting to concentrate on coaching. Dolph won the NBA Coach of the Year Award in 1966 but was fired after the Sixers failed to beat Boston in the playoffs.

Schayes later worked as the supervisor of NBA officials, and he was elected to the Hall of Fame in 1972. His son Danny had forged a long career in the NBA as a backup center for several teams.

Schayes had many memorable games during his long career. In 1952, he set an NBA record by converting 23 free throws (in 27 attempts) in a game against the Minneapolis Lakers. In the 1960 playoffs against Wilt Chamberlain and the Philadelphia Warriors, Schayes averaged 29 points and 16 rebounds over the course of three games.

From an historical perspective, his greatest game took place in January 1960 against the Boston Celtics. With a 30-foot set shot in the third quarter, Schayes became the first player in NBA history to score 15,000 points. The Nationals went on to beat the Celtics, and Schayes finished with 34 points