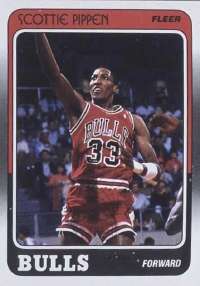 Scottie Pippen ranked with the best all-around players in basketball, just a tongue wag below teammate Michael Jordan. Even on the nights his shot wasn't dropping, Pippen dominated with defense, rebounding, and passing. Few players were better at defending on the perimeter than Pippen, a long-armed, cat-quick ballhawk who once led the NBA in steals, leaped for his share of blocks, and had a standing reservation on the league's All-Defensive Team.

Two high-profile post-season defensive assignments stand out in support of Pippen's defensive domination. The first came after the Bulls lost Game 1 of the 1991 NBA Finals to the Los Angeles Lakers. Pippen was assigned to guard Magic Johnson for the rest of the series, and the 6'7'' swingman stymied Johnson, sending the Bulls on a four-game streak to the first of their three straight titles.

The second opportunity came seven years later, at the sunset of Chicago's title run, when Pippen was again matched with a point guard -- the Indiana Pacers' Mark Jackson in the Eastern finals -- and defended him physically enough to change the course of the series. On offense, Pippen created myriad scoring opportunities, slashing to the basket for dunks or passes, or pulling up for jump shots.

Critics have also contended that he lacks leadership skills. The darkest moment in Pippen's career came in the 1994 playoffs when he refused coach Phil Jackson's orders to reenter a game against the New York Knicks when a last-second winning shot was designed around teammate Toni Kukoc rather than himself. As his career wound down, however, Pippen proved himself a valuable teammate with the Houston Rockets and a veteran leader for the Portland Trail Blazers.

Born September 25, 1965, in rural Hamburg, Arkansas, Pippen stood only 6'1'' and weighed 150 pounds as a high school point guard and wasn't offered any scholarships. His coach arranged for him to attend the University of Central Arkansas on a work-study basis as the basketball manager.

Allowed to practice with the team, Pippen won a spot on the roster and, within a year, sprouted five inches. After averaging 23.6 points his senior season, he stunned NBA scouts with his exploits at the league's pre-draft evaluation camps. The Bulls traded up to acquire him early in the 1987 draft.

Pippen played a reserve role for more than a year before moving into the starting lineup midway through the 1988-1989 season. He increased his scoring, rebounding, and assist averages in each of his first five seasons, finally making the All-NBA first team in 1994. Pippen also helped the U.S. win Olympic gold in 1992 and 1996.

Pippen returned to the Bulls but found himself fighting through knee injuries in his second run with the team. He nonetheless was lauded for his leadership and patience with a young, inexperienced team and his willingness to work. Pippen was considered the best teammate and top practice player from Chicago's run to six titles, and he's considered a promising future NBA coach.