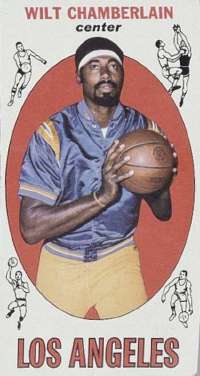 Wilt Chamberlain, by his own reckoning, was the greatest basketball player who ever lived.

He didn't win the most NBA championships; that record was established by his nemesis, Bill Russell. He didn't fly to the basket with the grace of Julius Erving or Michael Jordan, and he wasn't the most popular player to come down the pike. But no player could impact a game the way Wilt did.

When he retired in 1973 after 14 seasons in the NBA, Chamberlain had amassed 31,419 points, a record that took Kareem Abdul-Jabbar 15 seasons to break. Wilt's 23,924 rebounds are still the league standard. Only Michael Jordan has averaged more points per game. Wilt once scored 100 points in a contest, and he grabbed 55 rebounds in another. During the 1961-62 season, his third year in the league, he averaged 50.4 points and 25.7 rebounds per game.

Chamberlain may have been the best athlete of his generation. He was a national shot put champion at the University of Kansas and could have been a world-class decathlete. He was incredibly durable, once playing 47 consecutive games without a minute's rest. Arrangements were made and canceled for a boxing match with Muhammad Ali. The Kansas City Chiefs evaluated him as a wide receiver. After his retirement, Wilt became a renowned volleyball player. So confident was he in his physical prowess that he talked of a comeback in his early 50s.

Chamberlain was the first of professional basketball's dominating seven-footers. At 7'1", 275 pounds, he towered over the competition and could overpower most opponents near the basket. His long, high-waisted body made the nickname "Wilt the Stilt" inevitable. Yet Wilt played a finesse game. He liked to score with fadeaway jumpers or with his trademark "dipper" shot -- a soft, back-handed finger roll -- rather than dunks.

Off the court, he was flamboyant, a legendary womanizer who loved bright lights and big cities. When he played for the Philadelphia Warriors, he lived in New York and commuted to Philly by train. He owned racehorses, fast cars, and a Harlem nightclub called Big Wilt's Small Paradise.

Born in Philadelphia on August 21, 1936, Wilt was an average-sized baby, but by age 14 he had sprouted to seven feet. By his senior year at Overbrook High, he was winning pickup skirmishes against professional players. Kansas won a fierce recruiting battle for his services, but then lost him after two seasons. Wilt left in 1958 to travel the world with the Harlem Globetrotters. He entered the NBA in 1959 and proceeded to win the MVP and Rookie of the Year Awards while averaging 37.6 points and 27.0 rebounds for the Warriors.

With Chamberlain and shooting stars such as Elgin Baylor and Jerry West arriving in the NBA, the league's single-game scoring record was in danger of toppling on any given night. Baylor scored 64 points in 1959, breaking Joe Fulks's record of 63 set in 1949. In 1960, Baylor established a new mark with 71 points against the New York Knicks. A year later, in December 1961, Chamberlain scored 78 points against the Lakers. That set the stage for Wilt's exploits against New York on the night of March 2, 1962, in Hershey, Pennsylvania (see sidebar).

But while Chamberlain won scoring titles in each of his first seven seasons, the Boston Celtics won seven consecutive championships. Wilt was branded a loser and ridiculed in enemy arenas. "Nobody roots for Goliath," he often said.

Finally, Wilt broke through, leading the Philadelphia 76ers to the title in 1967. They smashed Boston 4-1 in the Eastern Division finals, with Wilt amassing 29 points, 36 rebounds, and 13 assists in the decisive game. They then beat the San Francisco Warriors, Wilt's former team, 4-2 in the NBA Finals. Earlier that season, Chamberlain attempted 35 consecutive field goals without a miss, a record that's never been challenged.

Despite his overwhelming talents, Chamberlain was traded twice during his career. After the Philadelphia Warriors moved to San Francisco, Wilt was swapped to the Philadelphia 76ers in 1965 for three lesser talents and cash. In 1968, the Sixers sent him to the Los Angeles Lakers for three nondescript players.

Chamberlain's scoring output diminished later in his career as he focused on other facets of the game. Determined to prove his worth as a team player, he led the NBA in assists in 1967-68. With Los Angeles in 1971-72, he averaged just 14.8 points, but the Lakers won a record 33 consecutive games and the championship. The next season, Wilt's last, he made 72.7 percent of his field-goal attempts, a record that still stands. Free-throw shooting was the one area that he never mastered; he made barely half of his attempts for his career.

After retirement, Wilt moved south to coach the San Diego Conquistadors of the American Basketball Association. He lasted one season, posting a 37-47 record. Over the next decade, NBA teams clamored for him to return as a player. He declined, saying he no longer could give fans their money's worth. He wanted to go out on top. He died in 1999.

It was supposed to be a meaningless game. The season was winding down, the Warriors were secure in second place, and the Knicks were in last place. But when Wilt erupted for 100 points on March 2, 1962, it became one of the most remarkable games in history.

Wilt started quickly, scoring 23 points in the first quarter, and had 41 by halftime. Many of the 4,124 in attendance sensed that the scoring record (78) was in jeopardy. Few sensed that Wilt was capable of a 59-point second half. But with guards Guy Rodgers and Al Attles feeding him the ball at every opportunity, and with Knicks center Darrall Imhoff hopelessly overmatched, Chamberlain scored 28 points in the third quarter and 31 in the fourth to reach triple digits.