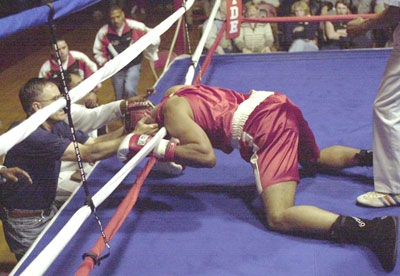 Photo Courtesy of the US Marines
1st Lt. Alan Singleton lays in the ropes as team officials rush to his aid following his knock out by Lance Cpl. Charles Davis.

Who won the round is mostly based on counting "scoring punches" -- punches with the knuckle side of the fist that strike the front or sides of the opponent's body (above the belt) or head. Olympic judges use a device to track who lands more scoring punches in a round. Fouls are also tracked and affect the scoring (when a boxer commits a foul, his opponent is given two extra punches for the round). Judging a pro boxing match can be more subjective. The judges may count punches, but they also take into consideration aggression, control of the ring, control of the tempo of the fight and damage inflicted. For example, if the red boxer lands a dozen decent jabs in a round, but his opponent, the blue boxer, nails him with two hard hooks late in the round that leave the red boxer dazed and staggered, the judges could very well award the round to the blue boxer. In fact, in such a case, different judges may score the round differently.

The points themselves are based on five-, 10- or 20-point systems, but they all work the same. In a 10-point system, the boxer who wins a round is given 10 points, and the other boxer gets nine points. If there was a knockdown in the round, or one boxer utterly dominated the round, the score may be 10-8. If a judge can't decide who won the round, it is scored 10-10.

There are four possible decisions:

There is a very rare result known as a majority draw, when two judges score a draw and one judge scores in favor of one boxer.