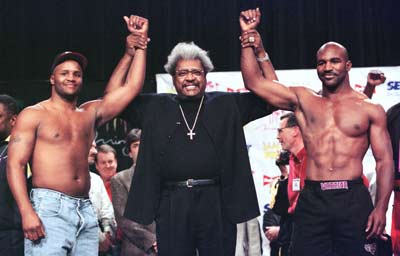 Don King is one of the most famous boxing promoters of all time.
Jeff Haynes/AFP/Getty Images

In 1999, The Sporting News listed boxing promoter Don King in its list of the 100 Most Powerful People in Sports for the 20th Century. At number 49, King is described as "The dominant boxing promoter for the past 20 years ... [who] has fashioned the sport into his own game, using bluster and swagger and an acute business sense to create an empire." That a promoter could be one of the most important figures in sports history gives a clue to the nature of the position: It has power. The difference between a skilled boxer you've never heard of and a skilled boxer named Muhammad Ali is often a really good promoter.

A boxing promoter is in charge of setting up and paying for everything involved in a boxing match and making sure all legal requirements are met at every step along the way. The promoter assumes all financial risk associated with the event, whether that means the promoter is paying for the event him- or herself or is securing a number of secondary investors to guarantee the costs are met. And when we talk about costs, we're talking about every single thing involved in a fighting event, from the plastic cups the beer is served in to the chairs for each corner of the ring to the ring itself, the round-number girl, the referee, the ticket sales, advertising, licenses and making sure the scales used for weigh-in are properly calibrated. A big-time promoter will often contract out a lot of the details, while a small-time promoter is probably standing in line at the state boxing commission's office to obtain the necessary licenses for a fight and is measuring the ring dimensions to make sure its up to code. But either way, the promoter is ultimately responsible if anything doesn't meet legal requirements or if something goes wrong and the ambulance isn't waiting right outside the venue with exactly two qualified paramedics.

The fact that the promoter is assuming all of the financial risk in setting up a fight means that he or she also logically expects to get a huge chunk of the profit brought in by that fight. This is where the promoter's interests are directly opposed to the boxer's interests. The promoter and the boxer's manager negotiate the boxer's "purse" for the fight -- how much money the boxer takes home for stepping in the ring. The boxers' respective purses are a cost involved in setting up the fight, just like supplying an ambulance and food vendors are costs. The larger a boxer's purse, the smaller the profit the promoter takes home. So the promoter's financial interests are best served by minimizing the boxer's purse as much as possible, and an unscrupulous promoter will take advantage of a young, hungry boxer who just wants to get in the ring and show what he or she can do. It's up to the manager to make sure the boxer gets a fair chunk of the pie. The promoter has no duty whatsoever to be fair to the boxer.

But while a promoter is going to do everything in his or her power to minimize costs, the interests of a boxer and a promoter do align in a general way in that both of them benefit from a well-publicized fight. The biggest skill involved in being a great promoter is being a great promoter -- knowing how to market and advertise a fight so that it appeals to the broadest possible demographic. It's knowing how get the most paying customers to want to see the fight. In this day in age, that usually means knowing the ins and outs of the pay-per-view system and getting all sorts of people, not just boxing fans, to pay a lot of money to get the fight on their home TV. For the promoter, a well-publicized, expertly marketed fight means profit. For a skilled boxer, it means going from "boxer with marquee potential" to "marquee boxer." And marquee boxers can negotiate huge, huge purses.

In the end, a boxer is best served when he signs on with a skilled promoter and sends in a loyal, dedicated manager to do the financial negotiating. Boxers who achieve not only success in the ring but also long-term financial success know to surround themselves with people who know the business of boxing as well as those who know the art.

For more information on boxing promotion and related topics, check out the next page.