At a recent barbecue, I discovered a new lawn game. New to me, I should say; everyone else in the world has apparently been tossing tethered golf balls at ladders for years.

Two ladders stood on the grass. My friend held three sets of small, red balls connected by a vinyl cord, and she handed me three blue ones. She called them "bolas," and they felt nice and heavy. I tossed one underhand at a ladder, wrapped it around the second rung, and spilled my beer celebrating. I liked it even better than Baggo.

A couple days later I picked up a plastic ladder-ball set for $35. They range from about $25 to $150, mostly depending on ladder material. Plastic tends to be cheapest, followed by metal, followed by wood. Some sets come with carrying cases for playing ladder ball on the go.

You may not know this game as "ladder ball." You may call it "Ladder Golf," a brand name for the first packaged version of the game. As the story goes, a guy named Matt Peterson saw people playing the game on campgrounds in the '90s, and he saw a business opportunity. In 2003 he started his company Ladder Golf, Inc. with two friends [source: Piazza, BackyardGameZ].

You might also know it as "ladder toss," "rodeo golf," "hillbilly horseshoes," "flingy pongy," "snakes and ladders," "bola toss," or "blongo ball." No idea on that last one.

Whatever you call it, the ladder-and-bolas thing falls into the "leisure game" or "lawn game" category alongside the likes of bocce and Baggo (a.k.a. bean bag toss or cornhole). It's simple, one-handed (no need to put down that beer), conducive to socializing and doesn't need a flat surface, which makes it ideal for backyards and campgrounds. It's really easy to play: Stand five paces from the ladder, aim, toss, and wrap as many bolas around the ladder rungs as you can.

Or maybe not as many as you can. It kind of depends. So maybe it's a little more complicated than that.

How to Play Ladder Ball

Ladder ball is a leisure game, so rules aren't hard and fast. Here, we'll go by the most common instructions, particularly those developed by Ladder Golf, Inc., but you'll find lots of variations out there.

Right out of the box, you've got either one or two ladders, about 3 feet tall and 2 feet wide (1 meter by 0.5 meter), and six bolas in two different colors. Each bola is a roughly a foot-long (0.3 meter) vinyl cord with a golf ball on each end. Game play is basically the same whether you're using one ladder or two; all that really changes is where the players stand.

To set the game up, place the ladder(s) on the lawn and establish a "toss line." If you're using two ladders, they can serve as each other's toss lines. The active player has to stay behind this line, which is typically about five paces, or 15 feet (4.5 meters) to be exact, from the ladder, though some instructions have the distance as high as 25 feet (7.5 meters) [source: Ladder Golf, Amazon]. Bola colors vary by brand, but let's say they're red and blue. One player gets all three red bolas, and the other all three blue ones.

Next, flip a coin for first-up. From behind the toss line, the first player – let's say the red one – tosses each red bola at the ladder. It's allowed to bounce off the ground first. The point is to wrap each one around a rung.

After Red tosses all three, Blue is up. Six tosses make up a round of game play.

You can toss any way you want, though underhand is standard. It's a good idea to keep the balls separate as you toss so they hit the ladder spread out, ready to hang. An effective method is to hold one ball in your hand while the other dangles, and then gently arc the bola toward the ladder rung you're going for.

When I played, I just aimed in the general direction of the ladder and hoped something stuck. But if you're playing to win, you may need to hit a specific rung, because you want a specific number of points. This is probably the most complicated aspect of the game.

The goal is to be the first player to reach 21 points without going over. If you score higher than 21 – let's say you had 19 points, you tossed, and you wrapped a bola around the top rung, bringing you to 22 – the toss that got you there is discarded from the round. You keep retrieving bolas and tossing until someone makes that score.

More important, a bola only counts if it is wrapped around a rung at the end of the round. So if Blue ends up knocking his own bola off the ladder on a subsequent toss, that bola doesn't score any points. If Blue knocks a red bola off the ladder, that one doesn't count, either. So aiming for an opponent's bola is good strategy. (Aiming for your own is not.)

A red bola and a blue bola on the same rung cancel each other out. So if at the end of a round there's one red and two blue bolas on the third rung, Blue gets three points, and Red gets none.

(Variation: All bolas on a rung count, so in the above example, Red would score three, and Blue would score six. This can speed the game up.)

If both players make it to 21 at the end of a round, an overtime round commences. In overtime, there is no point limit, but a player needs to be ahead by at least two points at the end of the round in order to win. Overtime rounds continue until one player finishes a round ahead by two.

You can also play ladder ball in teams of two. It's not much different: Team members simply alternate tossing by round. You don't necessarily need two ladders for team play, but most sets come with two, so you might as well. It can save time, since there's no running back and forth for the bolas between rounds.

Plus, with one player from each team at opposing ladders, it can really raise the level of trash talk, which is critical in any lawn game. Spilling beer while celebrating is optional, but apparently, it's good for the lawn [source: Greenwalt]. (Who knew?)

No one knows who came up with ladder ball in the first place, but the best story goes back to classic cowboy days in Mexico and the American West. The tale has bored cowpokes tossing snakes at trees, trying to wrap them around branches [source: LadderballPlus]. Not sure why they wouldn't have tossed the bolas cowboys used to bind the legs of cattle on the run, but the snake story sounds better anyway.

How serendipitous that I received this assignment exactly five days after playing ladder ball for the first time at a friend's Fourth of July BBQ. There were a couple of good-natured disputes between veteran players about the rules, and I was intrigued to find out who was right.

From my reading on multiple ladder-ball sites, I think they were both sort of right. It was the no-bouncing-off-the-ground variation in dispute, and we ultimately went with an OK-to-bounce rule. No one accomplished the feat, to my disappointment, and I've come away from this topic with the feeling it's wise to keep the rule sheet that comes with your particular set (if you're a stickler for such things). They seem to vary by manufacturer. 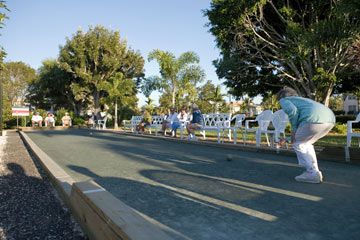 Up Next
How Bocce Ball Works
Explore More 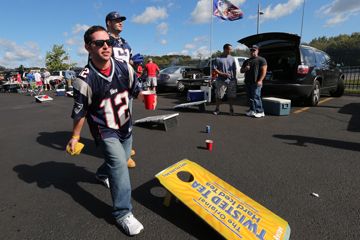 You May Like
How Bean Bag Toss Works
Explore More 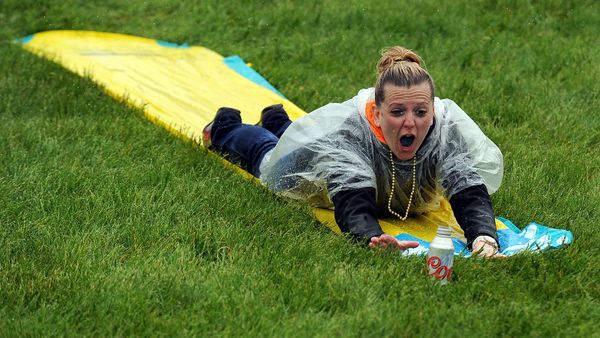