How to Play Bean Bag Toss 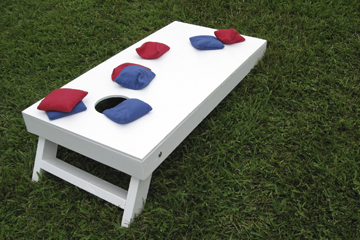 A bean bag toss set, complete with board and bags.
iStockphoto/Thinkstock

Want to score 21 points? It's not that simple.

For singles play, start by gathering two players and a platform. Each player takes turns tossing bags at the platform until all eight bags – four for each player – have been played, keeping track of the score as the game progresses.

In doubles play, teams of two players compete against each other using two platforms.

Using American Cornhole Association rules, the scoring goes like this:

Players have 20 seconds to deliver the bean bag once they enter the pitcher's box, which is 27 feet (8.2 meters) from the target platform. A pitcher can toss the bag from either side of the pitcher's box but must stay on the same side of the box for an entire inning. In an inning, both singles players take a turn or all four doubles players take a turn [source: American Cornhole Association].

The innings, or rounds, continue until a player or team reaches or exceeds 21 points. If you toss all the bags and no one has yet won, gather them up and keep going. A game can't end in the middle of an inning, so even if you score the winning point, you'll need to finish out the inning before calling the game.

In a variation known as "cancellation scoring," it becomes more difficult to win. That's because bags "in-the-hole" and "in-the-count" pitched by opponents in the same inning cancel each other out. Oh, and in a rare twist, if a player throws all four bags in the hole, it's an automatic 21 points for the win [source: American Cornhole Association, Stefanoff].