by Ed Grabianowski
Prev NEXT
12 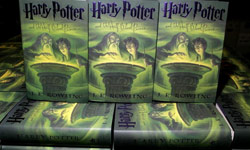 Copies of "Harry Potter and the Half-Blood Prince" sit in an Amazon.com warehouse in Nevada.
Justin Sullivan/Getty Images

This was the sixth book in the seven-book Harry Potter series (all seven make this list). It is notable for detailing the childhood of main villain Voldemort, and for an infamous death scene that shocked many fans. Not only has it sold lots of copies, it sold them incredibly quickly -- nine million within 24 hours of its release in 2005.