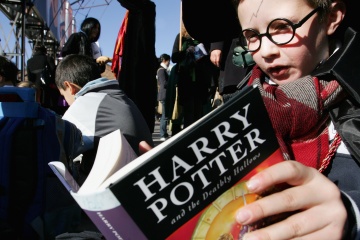 “Harry Potter” is riddled with themes of tolerance. Does the magical tale really help rid you of your prejudices, though?
Lisa Maree Williams/Getty Images

With at least 450 million books in print worldwide, the Harry Potter series is a universal phenomenon [source: Time]. Translated into 74 languages, J.K. Rowling's beloved "Potterverse" transcends all cultural boundaries [source: Scholastic]. Although originally written for kids and young adults, the series has struck a chord with people of all ages. Its themes — death, morality, questioning authority and prevailing over evil — resonate with almost everyone.

Perhaps more than anything, the Harry Potter books focus on tolerance. We're all told as children that reading opens our horizons and helps us learn, but there's a study on "Harry Potter" that actually proves the adage true.

A 2014 study published in the Journal of Applied Social Psychology showed that young people who read the books and identified with lead character Harry Potter displayed a reduced bias toward minority groups [source: Jacobs]. In the books, although Harry is a wizard, he often associates with "Muggles" and "Mudbloods," non-wizard groups often vilified by other wizards. Harry and his friends treat all people and creatures with respect as they fight for the forces of good and truth.

Professor Loris Vezzali of the University of Modena and Reggio Emilia in Italy conducted the study with several groups of students. First, he had fifth-graders answer questions about their opinions regarding immigrants, an often-stigmatized group in Italy. Over the next six weeks, one group discussed specific passages from "Harry Potter and the Chamber of Secrets" with themes of prejudice. The second group discussed passages without those themes. At the end of the six weeks, both groups answered the same questions again. The students in the group who discussed themes of prejudice had developed more positive views of immigrants (although, it's important to note, only the kids who identified with the character of Harry Potter).

Vezzali conducted another study with high school students and found that students who identified strongly with Harry Potter also had more positive perceptions of LGBT people. Vezzali also believes that people become more open to changing their views when they can identify with someone — be it a real person or a beloved character like Harry Potter.

The author herself says this is no accident. In her 2008 commencement address at Harvard University, J.K. Rowling spoke of her feelings about prejudice: "Choosing to live in narrow spaces leads to a form of mental agoraphobia, and that brings its own terrors. I think the willfully unimaginative see more monsters. They are often more afraid. What is more, those who choose not to empathize enable real monsters. For without ever committing an act of outright evil ourselves, we collude with it, through our own apathy" [source: Harvard Magazine].