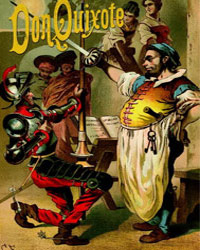 Miguel de Cervantes' novel about a man who becomes so infatuated with tales of knights that he decides to become one is one of the first novels ever written, originally published in 1612. Quixote's misadventures as he travels across the Spanish countryside seeking wrongs to right and downtrodden people to uplift have amused and enthralled generations of readers, and gave us the idiom "tilting at windmills" to indicate a noble but futile endeavor.

While the novel enjoys surges in popularity now and then, especially in Spain, the sales number is a guess. It is the oldest book on this list, so it's had a long time to accrue sales. There is, of course, no way to tally sales from the 1600s, so although some sources suggest that this has sold 500 million copies, there's no way anyone could know for certain. We've placed it at this point on the list as a book that has had a great deal of worldwide popularity over a great span of time, but with an indeterminate total sales number.