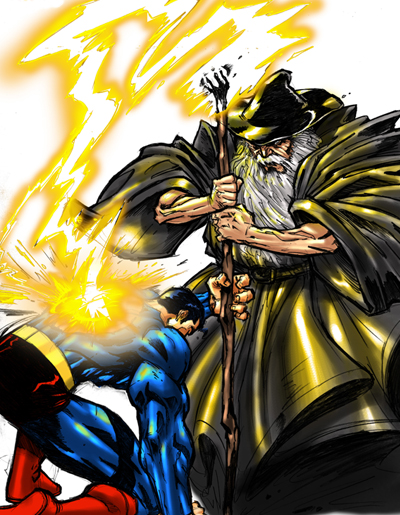 In some ways, magic is the new kryptonite. Superman has no defense against it, and it can affect him greatly. He's fought many powerful magicians, many of whom have been difficult to defeat. The outcome of these battles depends on strategy and exactly what kind of magical powers he's facing.

At first glance, Gandalf the Grey, a wizard from "The Lord of the Rings: The Fellowship of the Ring," is no match for Superman. After all, he seems to be an elderly gentleman with a staff and a pointy hat who can make fireworks. But the important thing to remember is that Gandalf single-handedly defeated the Balrog known as Durin's Bane, an enormous, fiery demon inadvertently unearthed in the Mines of Moria.

Gandalf and the Balrog are both of the Maiar -- powerful spirits present from the beginning of the world. The Maiar are second only to the Valar, the godlike beings who sang the world into existence. Gandalf isn't just an old man with a stick, and the Balrog isn't just a monster made of fire. They're both essentially demigods.

If you don't remember Gandalf's fight with the Balrog, here's how it went down. The foes met on the bridge of Khazad-dùm in the Mines of Moria. Gandalf stood between it and the rest of the Fellowship. He broke the bridge, and he and the Balrog both fell. Gandalf chased the Balrog for eight days, then fought it for two days and nights. Finally, he threw the Balrog from the top of a mountain, and its fall broke the mountainside. After the Balrog fell, Gandalf died.

The Balrog succeeded in killing Gandalf for one reason; when their battle began, Gandalf was already weary. If he faced Superman rested and refreshed, their battle would resemble his fight with the Balrog or Superman's first fight with Doomsday. Doomsday is the only being that has ever managed to kill Superman.

A fight between Superman and Gandalf would be similar -- the landscape around them would shatter from its impact. But, in the end, Gandalf is immortal, and he's nearly a god. Even though he doesn't have the youthful appearance or visually stunning powers that Superman does, he has the divine power to outlast and eventually overpower him. In addition, although he doesn't wield fireballs, Gandalf has power that most people would call magical and which can affect Superman.

Gandalf doesn't create many visual displays of magic, but Harry Potter does. Even though he's just a teenager and hasn't completed his magical training, Harry Potter has plenty of ammunition against Superman. Whether it's something as silly as the Bat-Bogey Hex or as devastating as Avada Kedavra, Superman has no defense against magic.

The real question is whether Harry would stoop to using one of the Unforgivable Curses on Superman. With the Imperius Curse, Harry could force Superman to do something deadly, like walk into a room full of kryptonite. He could also debilitate Superman with the Cruciatus Curse, which causes pain so intense that it can drive victims insane. Or, he could kill Superman directly with the Killing Curse.

However, the three curses that could bring a swift and deadly end to a fight with Superman are also the three that Harry is least likely to use. All three are forbidden in the wizarding community. The only wizards who use them are Dark wizards, aligned with Voldemort. However, Harry has a Batman-like desire to avenge the killing of his parents. If Harry were convinced that Superman killed Lily and James Potter, he might react with the Unforgivable Curses.

Even without those curses, Harry knows plenty of spells that could slow down or stop Superman. A quick Petrificus Totalus would paralyze Superman completely. Various hexes and jinxes could also slow him down. But without an Unforgivable Curse, Harry wouldn't be able to end the fight. He'd need to enlist Hermione Granger, who could either find a source for kryptonite, find a magical way to create it or find a spell to mimic its effects.

Harry would also need both Hermione and Ron Weasley to help him strategize. Some spells require the caster to be able to see his target, and Superman's speed could make that impossible. Hermione, Ron and Harry would have to work together to keep Superman from simply flying up to Harry and breaking his wand. For Harry to defeat Superman, he'd have to have the right motivation and very careful planning.

Regardless of the opponent, any battle against Superman requires the right combination of luck, skill, strategy and weaponry.

For lots more information about Jedi, Superman and related topics, check out the links below.

Superman's hypersensitive hearing isn't always an asset, since it makes him particularly vulnerable to sonic attacks. For example, he might find himself unable to defeat the Witch-king of Angmar, the leader of the Nazgul in the "Lord of the Rings" trilogy. The Witch-king cannot be defeated by man, which his why Eowyn, a woman, was able to destroy him. Superman technically isn't a man (he's a Kryptonian) but that loophole won't defend him against the Witch-king's piercing voice.

In season six of "Buffy the Vampire Slayer," Willow Rosenberg gives in to dark magic. Earlier in the season, she demonstrated a flair for tinkering with time and dimensions. In the end, she flayed someone alive before trying to channel energy that would destroy the world. In addition to her immense power, Willow is unpredictable and grief-stricken, which would make her a formidable and reckless opponent. Most likely, Xander, often portrayed as the most useless member of the Scooby gang, would have to come to Superman's rescue.