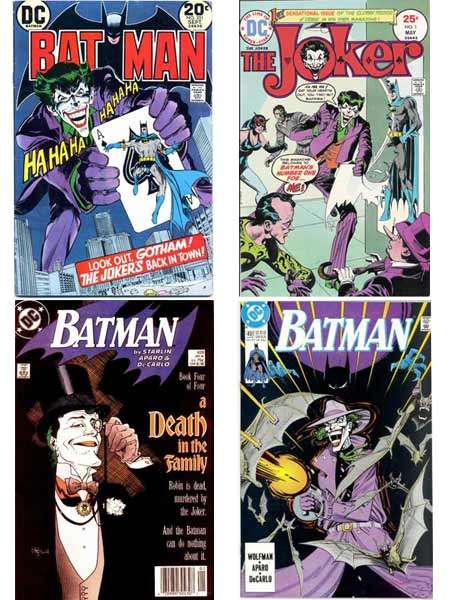 Following his insanity-fueled return (Batman #247), the Joker got his own series (Joker #1), killed Robin (Batman #249), and returned from the dead, yet again, to deal with an impostor (Batman #451).
Image courtesy DC Comics

"I did it! I finally killed Batman! In front of a bunch of vulnerable, disabled kids!!!! Now get me Santa Claus!"

The ongoing battles between Batman and the Joker raise a couple of questions. Why haven't the Joker and Batman killed one another? And if the Joker has murdered so many people, why is he still alive?

As far as Batman is concerned, it is against his personal code and mission statement to kill his enemies and thus become as they are. The Joker's excuses, on the other hand, are a little more complex. On numerous occasions, the Joker has gotten the drop on Batman only to refuse to finish his foe. His reasons include it not being a dramatic enough ending to their rivalry or feeling that putting a prone Batman down would be anticlimactic. The Joker feels that it is his destiny to defeat Batman in a worthy manner that finally proves his random madness is superior to the Batman's calculating detective skills. It has also been hypothesized that the Joker fears that without Batman as a catalyst for his actions, his life would become meaningless, as evidenced in Batman #663 when the Joker states, "I could never kill you. Where would the act be without my straight man?"

The Joker has managed to avoid the death penalty due to being labeled criminally insane. In the graphic novel "Arkham Asylum," writer Grant Morrison proposed that the Joker suffered from a kind of "super-sanity" of heightened sensory perception and that he lacked a true personality of his own, adapting his psyche to whichever was the most beneficial. Morrison revisited his ideas on the Joker's sanity in Batman #663 and proposed that each time he escaped from confinement, a new personality would emerge, explaining the changes in the Joker's character through the years.

Thus, instead of being sent to prison following his capture, the Joker is sent to the Gotham City psychiatric hospital, Arkham Asylum. Originally created to house only the mentally disturbed of Batman's foes such as Joker and Two-Face, Arkham Asylum has evolved into the destination for most of the Dark Knight's rogues gallery. It's also where the Joker met his ex-shrink turned sidekick, Harley Quinn.

To learn more about Batman, movies and related topics, check out the links below.