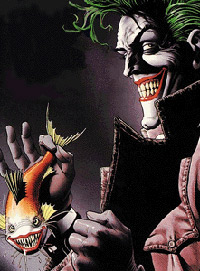 When writers Denny O'Neil and Neal Adams were tasked with updating the Batman line in 1973, the Joker came back to the forefront. In his latest incarnation, the Joker returned to his more murderous ways. But instead of a cold and calculating thief, this Joker became a homicidal maniac with no reservations about impulsive and sporadic killings.

This more lethal Joker envisioned himself as Batman's equal in terms of intelligence and wit but did not hesitate to employ the occasional gimmick, like Joker Toxin. He displayed increasingly sociopathic behavior, such as continuously murdering his henchmen. It was during this time that the Joker even received his own limited series. In it, he battled a different hero each issue only to be re-incarcerated at the conclusion of each story. During the late 1980s, this maniacal behavior was taken to the next level in several episodes. His crimes included beating the second Robin, Jason Todd, with a crowbar before apparently killing him in an explosion. He also kidnapped and tortured Commissioner Gordon and paralyzed Batgirl, Gordon's daughter Barbara, by shooting her in the spine.

In current DC continuity, the homicidal harlequin incarnation of the character has remained firmly in place while the Joker has engaged in some of his most ambitious endeavors to date. Such campaigns include stealing Superman foe Mr. Mxyzptlk's reality-altering powers to reshape the world in his image, as well as infecting a large population of super-villains with his insanity-producing Joker-Venom.

The Joker has also managed to find a sidekick of sorts in Harley Quinn, his one-time psychiatrist who he manipulated into becoming obsessed with him. Though occasionally thinking big, the Joker has remained no stranger to random sadism. This is evident in the murder of Commissioner Gordon's second wife and the shooting of Zatanna, magician and Batman ally, in the throat.

Most recently, the Joker was shot in the face by a corrupt police officer masquerading as Batman. He nearly died before being resuscitated at Arkham Asylum. Extensive reconstructive surgery was required to revive him, and now the Joker has been left with a permanent grin that makes it difficult for him to speak.

Believing himself to have been shot by the actual Batman and once again facing further disfigurement, the Joker emerges with an even more lethal and psychotic persona. Able to communicate by blinking his eyes in Morse code, the Joker orders Harley Quinn, masquerading as his speech therapist, to execute each of his former henchmen. Sparing only Harley herself, the newly dubbed "Crown Prince of Killers" and "Harlequin of Hell" now believes that he must up the ante in order to compete with Batman, who he believes is willing to murder him.