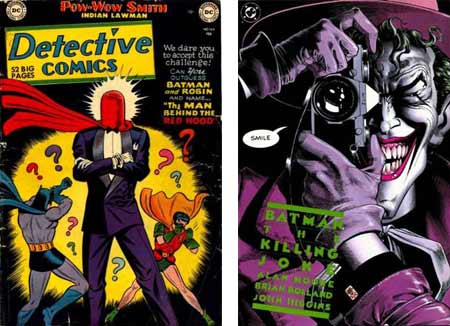 The Joker’s origin was first revealed in Detective Comics # 168 and expanded in "The Killing Joke."
Photo courtesy DC Comics

"I'm not exactly sure what happened. Sometimes I remember it one way, sometimes another ... If I'm going to have a past, I prefer it to be multiple choice!"

In comics lore, as revealed in Detective Comics #168 (1951), the man who would become the Joker first masqueraded as a criminal known as the Red Hood. During a botched robbery at a Gotham chemical plant, the Hood jumped into a vat of hazardous chemicals in order to escape from Batman. Upon emerging from a drainage pipe, he discovered that his skin had been bleached white. His hair had turned green, and his mouth was permanently distorted into a large grin with bright red lips. The chemicals caused him to go insane, thus transforming him into the Joker.

Although this origin is considered canon in DC Comics continuity, the Joker's earlier life is up for debate. So are the circumstances surrounding why he wore the Red Hood guise. The most accepted origin is found in Alan Moore's "Batman: The Killing Joke." Moore presents the pre-toxed Joker as a chemical engineer who quits his job to become a stand-up comedian. Failing miserably as a comic and desperate to provide for his pregnant wife, the man accepts a job to guide two thieves to the Monarch Playing Card Factory through the neighboring chemical plant where he worked. During the planning stages of the heist, police inform the man that his wife has been killed in a household accident. It's possible she was killed by corrupt police involved in the heist. Although he's hesitant to continue the caper, the man is strong-armed into donning a red helmet and leading the two thugs through the plant.

While "The Killing Joke" is the most accepted comic-book origin of the Joker, the desperate engineer is not the only version of the villain's beginnings. In another retelling, the young Joker collects the bones of animals he tortures. He also takes pleasure in his mother's abuse at the hands of his father. This version reveals that the Joker's first murder was committed on a neighborhood boy who discovered his "pet cemetery" and that the young Joker later murdered his father.

In addition to the different stories of how the Joker came to be, there is much debate over who should be called the father of the Clown Prince of Crime. Comic-book artist Bob Kane, fellow artist Jerry Robinson and writer Bill Finger all stake a claim to having created the Joker. Kane maintains that he and Finger created the joker, while Robinson contributed only the Joker's playing card [source: Frank Lovelace]. Robinson, on the other hand, alleges that he had already drawn the Joker before Finger ever showed him a picture of Veidt [source: Epstein].

­Next, we'll look at changes to the Joker's character over the years.­­