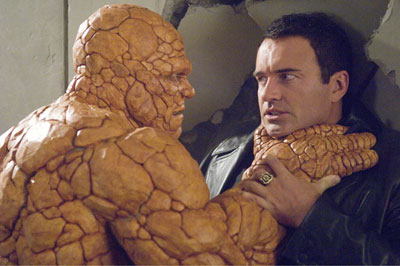 Ben grows up in a tough neighborhood, and is even in a gang for a while. He manages to straighten up as a teenager and attends State College on a football scholarship. His roommate is Reed Richards. Ben plans on becoming a pilot, and after graduation sets out to accomplish his goal. He becomes a top test pilot for the space program, and when Reed needs someone to pilot his ship, Ben agrees (despite his concern that the ship's shields aren't adequate). When Ben turns into the Thing, he finds adjusting to his new life very difficult. He occasionally changes back into his human form, though he rarely has any control over the transformation. As time passes, these transformations become more rare, and now he seems to be stuck as The Thing. He has left the team several times and pursued a life of isolation.

At one point, Ben is welcomed into the community of misfits ruled by the super villain known as The Mole. Ben's appearance inspires fear in everyone, and as a result his relationship with his fiancée ends. Ben meets a young blind woman named Alicia Masters, and the two fall in love. Their relationship slowly evolves into a deep friendship. Ben's favorite phrase is "It's clobberin' time!" He is quick tempered, loyal and extremely sensitive about how he comes across to other people.