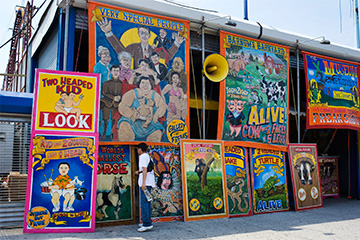 Coney Island is one of the few places in America where you can still see a freak show.
Christopher Groenhout/Lonely Planet Images/Getty Images

If you're a fan of FX's "American Horror Story," then chances are you're already familiar -- very familiar -- with the concept of a freak show. The serial television drama is set in the early 1950s, at the downturn of the freak shows popularity, and includes characters that exhibit the mileage of a tough industry. There's a bearded lady, conjoined twins, a "lobster boy" and others who illustrate the challenges that crop up when an entire society loses interest in one's "otherness."

At the height of their popularity in the mid-19th century and early 20th century, freak show performers were superstars. They'd reached celebrity status and were compensated accordingly, often earning thousands of dollars each week. People with medical oddities willing to put themselves on display experienced many of the things that come with stardom, including their own entourages designed to satisfy their every need and whim [source: Ayers].

Freak shows were, at their core, a way to make money. As people paid for the privilege to enter the freak show, they were lining the pockets of the show's promoters and, to a lesser extent, the participants themselves. In fact, freak shows offered performers a way to earn a living that otherwise wasn't available to them. And, as freak shows gained in popularity, some people began purposefully changing their appearances to make a living as a performer. The Great Omi (also know as the Zebra Man), for example, voluntarily tattooed his face and body with one-inch wide zebra stripes. His sole purpose was to become a freak show attraction [source: Gilbert].

Not all freak show performers had physical abnormalities. Some exhibited interesting and unusual skills or visual additions, such as eating fire or -- like The Great Omni -- being covered head to toe in tattoos.

Circus owners, the most successful of whom were also natural-born promoters, used their enterprise's accompanying freak shows as a way to build interest in their events. It was, perhaps, the earliest form of social media marketing. As freak shows traveled from town to town with the circus, tales of the performers took on legendary proportions. And, to mix it up, promoters like P.T. Barnum would offer everything from "10 in One" shows to "men only" shows. The "10 in One" shows would have 10 performers stand on a platform as paid customers walked past. The freak shows for men only included oddities believed too disturbing for women and children. Aside from the potential to see a scantily clad female performer, these men-only shows often included displays of pickled punks, which were deformed human fetuses preserved in clear jars [source: Grande].

Freak shows started declining in the 1930s as people began seeing them as exploitative and lacking in dignity for the performers. Doctors also began to diagnose and treat some of the diseases that had caused the deformities. The final nail in the coffin was the rise of television, which allowed people to stay at home and watch other forms of "lowbrow" entertainment [source: Grande].