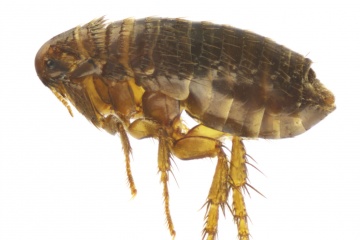 Fleas come in about 2,000 varieties. They're wingless and parasitic, using piercing mouthparts to slurp the blood of their hosts. The ones used for circuses have flat, reddish brown bodies that are about 2.5 millimeters (less than a hundredth of an inch) long and have elongated hind legs that enable jumping capabilities of fantastic proportions. Their vertical leap may top 7 inches (17.8 centimeters), and their long jump can exceed 12 inches (30 centimeters), which is many, many times the insect's body length. Those characteristics are what make fleas perfect for tiny circus shows.

In the 1570s, a London blacksmith became one of the first people to enslave a flea to do his bidding. The purpose of his project was to show off his craftsmanship, in which he created a tiny gold chain that he subsequently affixed to a flea, sort of like the world's smallest dog collar. The smithy, named Mark Scalliot, gained fame from his public relations feat and inspired others to take up the flea-powered phenomenon. Other craftsmen, such as watchmakers, utilized similar flea gimmicks to tout their work and artistry.

In the 1820s, a paradigm shift of sorts came to flea acts, thanks in part to Louis Bertolotto, an Italian impresario living in London who decided fleas were his itchy ticket to fortune and glory. He proclaimed his new act as an "extraordinary exhibition of industrious fleas," in which the bugs were the stars of the show instead of the products.

Bertolotto's show was part action, part humor and part social commentary. His fleas pulled a tiny carriage. They danced to an orchestra featuring tiny instruments, which the fleas supposedly played with audible enthusiasm. They brought to life a recreation of the Battle of Waterloo, riding on golden saddles and wielding swords against their foes. The fleas even donned full battle regalia for their rounds of warfare.

It would be difficult to overstate Bertolotto's fame and popularity. He wasn't an obscure sideshow freak. He was a rock star performer of the first rate, like Elvis or Johnny Cash. His shows were so successful that he took them all over the world and to North America, which spawned countless imitators. So, flea circuses kept spreading, sort of like the bugs themselves.