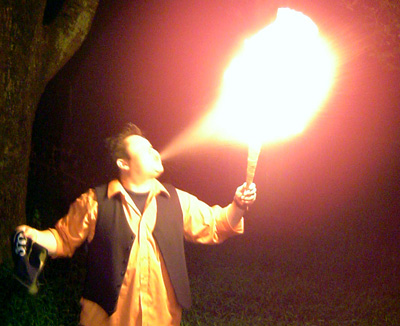 Jugglers, magicians, acrobats and sideshow performers have something in common -- they make astounding or difficult tricks look very easy. Fire breathers, who often specialize in one of these forms of entertainment, amaze people because they seem to exhale a plume of fire as though it were as easy as taking a breath.

But fire breathing is the most dangerous of all the fire arts. People who breathe fire professionally have to go to great lengths to keep themselves and their audiences safe. And since the process involves fire and flammable, toxic fuel, fire breathing accidents can be deadly.

To get an inside look at how fire breathing works, we interviewed two fire breathers. Mike Garner is a juggler and vaudevillian performer who started breathing fire in 1993.

­Our second performer uses the stage name Pele, and she incorporates a number of sideshow acts in her shows. She had about ten years of fire stunt experience at the time of our interview.­ In this article, these performers will help explain the basics of fire breathing, the potential dangers and the safety measures that protect fire breathers and their audiences.­

Performers agree that fire breathing is the most dangerous of all fire stunts. The fuels are toxic and potentially carcinogenic, and a fire can get out of control quickly. Magazines, books, and Web sites often have incomplete or incorrect instructions, so people who want to learn to breathe fire should do so only with the help of a trained professional. 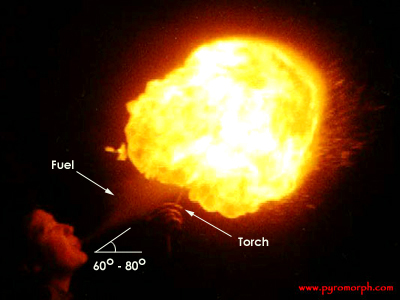 Pele creates a plume of fire by directing fuel from her mouth through a flame source. She keeps the fuel and flame at a 60 to 80 degree angle.
Photo courtesy Pyromorph

Fire breathing acts can be stunning, or even startling. "It's a very spectacular effect," says Garner. "There are very few things that produce as much amazement...it's something people don't see very often."

To make a pillar of fire, a fire breather uses two basic components: fuel and a flame source. Put very simply, the performer directs a mouthful of fuel in a forceful spray over a flame. The result can be a pillar, a plume, or a ball of fire.

It sounds simple, but controlling the fuel's direction and the consistency of the spray is a technique that takes a lot of time to refine. Fire breathers usually practice extensively with water before ever taking a mouthful of fuel or lighting a torch. They focus on controlling the spray's direction and consistency. "You can still see the fuel in the air," says Pele. Garner adds that if the spray is not fine enough, "the fuel will catch on fire and then fall to the ground and burn."

Another important factor is the angle of the fuel, and therefore the flame. Pele explains that it should be "between a 60 [and] 80 degree angle…Lower can make the flame come up on a body part, and higher can cause un-ignited fuel to fall back into the face. The angle is extremely important."

When preparing to breathe fire, performers examine their surroundings, including the direction and speed of the wind. "I watch the flames," says Pele. "They are the best tell of everything we could use. They respond to every subtle nuance in the air."

Garner stresses the importance of knowing the surroundings: "Be aware if there are any power lines or there are trees with low hanging branches...be aware of where your audience is, where you are...anything that might be around you."

By Any Other Name

One of the challenges of talking about fire breathing is that there is no perfect word to describe exactly what the performer does. Performers use a range of words to describe fire breathing, including aspirating, blowing, breathing and spitting. Even though "breathing" is not the most technically accurate word, it is the word most people associate with this type of fire stunt. 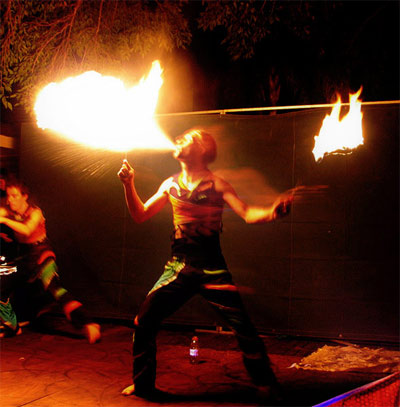 A fire breather
Photo courtesy Carnival of the Divine Imagination

The choice of fuel is just as important as a fire breather's technique. Fire breathers consider several factors when choosing a fuel, including:

The most commonly used fuel is kerosene, also known as paraffin outside of the United States. Lamp oil is chemically similar to kerosene and is also a common choice. These fuels have a high flash point, making them somewhat safer, but tend to be smoky and produce a noticeable smell. Neither is safe for ingestion, and both can contain toxic additives.

Some performers use naphtha, also known as white gas, Coleman fuel or lighter fluid, for some fire stunts. However, naphtha has a low flash point, making it more volatile and more likely to burn the performer. It is also toxic. Most performers consider it to be a more dangerous fuel choice for fire breathing.

Fire performers stay away from some fuels entirely. "I avoid all alcohols and gasoline...at all costs," says Pele. "They should never be used in any fire effects...methyl alcohol is extremely toxic, and ethyl alcohol allows drunkenness, which should never be combined with fire work. Both [alcohols] also have extremely low flashpoints, which make them very dangerous to work with."

Fire breathers typically use a torch, which they either make or purchase, to ignite their fuel. Smaller items, like matches, keep the performer's hand dangerously close to the flame. Lighters are dangerous for the same reason, and because they can explode in the fire breather's hand.

But directing fuel from the mouth through a flame is the smallest component of a fire breather's performance. Protecting the performer and audience is an even greater undertaking. In the next section, we'll examine the dangers of fire breathing and the steps performers take to minimize the risks.

Fire breathers and fire eaters are prone to a condition called hydrocarbon pneumonitis from inhaled fuel. This condition is prevalent enough in fire performers that it has been nicknamed "fire eater pneumonia" [ref].

When talking about fire breathing, most performers acknowledge the dangers and emphasize the steps they take to minimize them. Many decline to teach others to fire breathe because of the risks involved. "I discourage people from trying it every chance I get," says Pele.

Burns are the most obvious fire breathing danger. Performers can influence the direction of a fire, but they cannot actually control it. Shifting wind or other conditions can cause a flame to get out of control, burning the fire breather, the audience or property. Another burn hazard is blowback, which is when the flame follows the fuel back to the performer's mouth.

Since fuels can contain carcinogens, fire breathers may be at a higher risk for several cancers.

My first course of action is that I have a trained "safety." I train someone I trust (who actually wants the job) in use of a fire extinguisher, how to use a damp towel [and] a fire blanket, and we work intensively on making sure he or she can effectively extinguish all tools. And then he or she works with me on if I catch fire and how to extinguish me. And then we train on extinguishing the area should it catch fire.

Pele inspects her equipment and her costume before every performance. She checks the content of her first aid kit and inspects the area where her performance will take place. She maintains liability insurance and works in conjunction with the local authorities: "We contact the local fire marshal to make sure we have permission...and I submit a burn plan."

Performers make sure to remove excess fuel from their faces and hands after they breathe fire. They also try to minimize the effect of fuel on their bodies. "The best thing to do is to drink milk or take an antacid before performing...and then eating some bread or anything that's going to soak up the fuel...and help it pass out of your system," says Garner.

"Home of Poi" has several detailed articles about fire safety and fire breathing safety. In addition, the North American Fire Artists Association and the National Fire Protection Association maintain comprehensive guidelines for fire performance safety. These provide helpful standards for performers, but Pele cautions that they are not universally accepted. "Every township has their own laws we have to work within, and there is no blanket catch-all standard."

Virtually all professional fire breathers experience an accident at some point in their careers. These accidents usually involve burns, swallowed fuel or inhaled fuel. Mike Garner describes the accident he had during a benefit performance:

[ I ] experienced what you call a blowback, which is basically when the flame comes through the path of the fuel back to [its source], so if it's coming from the mouth, it basically retraces its steps. [It] went back to my mouth, and I ended up swallowing some of the fumes, the hair on the side of my head got singed and [ I ] ended up having to go to the hospital. 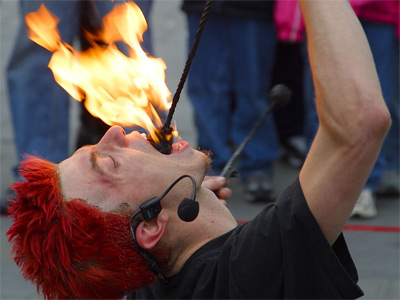 Fire eating: Performers create the appearance of eating fire by extinguishing a burning prop in their mouths. They can hold burning fuel in their mouths, since the surface of the fuel and its fumes burn, leaving the skin of the mouth unburned. Fire eaters can use also the burning fuel to light other fire props.

Juggling: "Just about any juggling prop, you can add fire to," says Garner. Props frequently used for customized for use in fire juggling include Diabolos, Devil sticks, Torches and Staffs

For more information on fire breathing and related topics, check out the links on the next page.

Pele had a serious fire breathing accident in 2002. The wind shifted suddenly during her performance, and she inhaled some of her fuel. She was seriously injured and hospitalized for several weeks. Pele gives a very personal account of the accident and its effects on her and those around her in an interview recorded for the fire arts Web site Home of Poi.

Since recovering from her accident, Pele has focused her shows on other fire stunts and sideshow acts instead of on fire breathing.