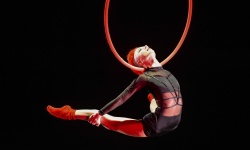 Learning to deal with mistakes is important for circus performers, especially since many aerial acts do not use a safety net.
Ray Tamarra/Getty Images Entertainment/Getty Images

Many of us non-circus folk would assume that the best way to stay safe doing a trick is to never, ever make a mistake while performing it — even during practice. And that is, of course, true: It's a pretty terrible idea to get lazy while performing and simply count on a backup plan. In fact, some aerialists don't use nets if they're working closer to the ground or using equipment that may tangle, and it keeps them on alert. But that doesn't mean, of course, that they're not preparing for danger.

A significant part of practice that the audience doesn't see? Learning to make a mistake correctly. Because even something like taking a tumble off the trapeze can't be done without serious prep. One must drill the safest and most effective way to fall into a net, for instance. It might sound like an easy task ("Hey, I can let gravity do its job without practicing once!"), but it becomes a little more complicated when you realize the net itself can be dangerous. Because it's strung so taut, you can hit the net and bounce out or even suffer a broken bone if you don't prepare your body correctly for impact.

Oh, what — you never realized that a good conditioner was so wildly important to circus safety? Silly you. Lots of circus performers swear by a healthy scalp to stay secure and safe in the ring. If you're starting to wonder whether this list has lost its beautiful luster, then you're forgetting (or perhaps never knew) the world of circus hair hanging.

Hair hanging first caught on as a performance act in China, but it's become a contemporary hit for audiences. Essentially, hair hanging is an acrobatic or contortionist act where the performers are — you guessed it — suspended by their generally substantial locks. And while it might look like that's the gist of it to a cringing audience member, there's actually quite a bit of safety prep that goes into making the hair strong and ready for a good dangle. Some performers condition their hair several times a day. But the coolest thing might be the braid that performers use. There are specific types of braids that distribute weight well on the ring so the act is less painful and the hair is stronger. Want to know any of them? No can do: They're well-kept secrets that an audience member can never know.

It's not good that it took a tragedy to get the job done, but a recent development in circus safety could be a significant step toward increasing performer protection. In a terrifying accident in 2014, eight hair-hanging aerialists fell to the ground when a clip securing them failed [source: Buteau]. While none of the artists died, there were severe injuries.

In response, Ringling Bros. and Barnum & Bailey Circus agreed to make a few changes to the safety protocol used in their aerial acts. One of the biggest changes is that a registered, professional engineer is now required to review the acts and equipment [source: Shalvey]. A checklist is also required for hardware and equipment assessments, and employees have a "safety day" to ensure communication about practices or issues.

The measure doesn't just affect one act, either — it's for all aerial acts and hopefully will help guarantee a more concrete safety strategy.

Although reading about circus disasters can be pretty depressing, a lot of the circus safety strategies you (don't) see today have been in response to accidents that occurred under the big top. The 1944 Hartford, Connecticut circus fire caused the loss of 167 lives and left hundreds injured when the tent covering the ring caught fire [source: The Hartford Circus Fire]. There weren't enough proper exits, and the ensuing panic caused a stampede and chaos.

After the Hartford tragedy, it was obvious that regulations had to be improved for traveling entertainment that used temporary structures. The Hartford fire prompted national safety regulations for circus, carnival and fair entertainment through the American Standards Association. Now tents have to be fireproof, trained fire personnel have to be on-site, and exits are regulated. So while you may be blissfully unaware while watching a clown goofing off, know that some serious regulations and safety standards are keeping you safe under the big top.