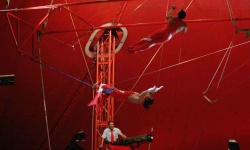 The rigging in a circus is customized for each act.
Dan Porges/Archive Photos/Getty Images

If all the safety strategies in the circus were totally transparent to the audience, we would be incredibly bored in the big top. Because when we say the audience can't "see" the safety measures, we don't mean they're secretly wearing tiger-repellent vests or gravity-defying underwear that allow acrobats to fly with ease between trapeze bars. Instead, there's a pretty rigorous behind-the-scenes series of checks and balances that make performances run smoothly.

Of course, as with all things circus, that doesn't mean you should expect the mundane. We'll fill you in on what keeps the circus humming, and some of it really might surprise you. Let's just say that for certain performers, a healthy scalp could literally save your life.

But let's start with a really basic part of circus safety that audience members may not ever notice: the all-important rigging systems. Step right up to find out how performers fly through the air with such ease.

A lot of hidden mechanisms for safety under the big top are tied into aerial acts. And for a good reason, of course: Hanging dozens of feet in the air — let alone performing acrobatic stunts or flying from one spot to another while doing it — can't exactly be a spontaneous act. Experts control the rigging that keeps aerialists safe, but the audience doesn't see them.

When we say rigging, we're referring to the wires or lines that control the performers' movement in the air. While we might be able to name a standard for rigging in, say, window washing or construction, it's not really possible to detail how rigging works in the circus in a brief description. That's because acts in the circus strive to be unique, and the rigging systems that are created for the performers must be specific to the actions they're executing. But let's take a closer look at one rigging element many circus acts use.

In order to talk about some rigging and safety strategies the audience doesn't see, we're going to take a closer look at a terrible Cirque du Soleil accident that caused the death of a performer in 2013. To understand why the accident happened, we'll examine a few safety strategies that unfortunately went awry. Sarah Guillot-Guyard was an aerialist with the "Ka" show in Las Vegas when her wire snapped and she fell 94 feet (29 meters) [source: Berzon and Maremont].

In order to rise and drop at the levels needed, aerialists carry joysticks to control their speed. No, it's not some stagehand grunting heavily as he pulls wires hand over hand: Performers use a mechanized tool to lift and lower themselves. Since performers can go as fast as 11 feet (3.4 meters) per second, you might understand why they have technicians with "kill switches," which are designed to turn off the rigging at signs of trouble [source: Berzon and Maremont]. Those emergency switches are one more safety strategy that the audience is blissfully unaware of. In Guillot-Guyard's case, she rose much more quickly than expected, and the kill switch was never activated.

Circuses, of course, aren't all aerials and flying trapeze acts. While we might think of equestrian performances as safer than airborne acts, it's hard to believe that vaulting off a 1,000-pound (454-kilogram) horse galloping at full speed is for more reserved performers. And yeah, sure: Perfecting every trick really might involve simply getting back on the horse (pun intended), but there's certain safety equipment required in some circuses for equestrian practice.

In the circus, a mechanic isn't the guy who charges you twice for something you didn't need in the first place. Instead, it's a safety belt performers wear that can lift them away from a horse should something go awry. The ropes can be slack so performers can easily practice their tricks, but a crew member keeps an eye out to quickly tighten them if a fall or accident occurs. Sure, you might not see it in the ring as an audience member, but it's an extremely important safety strategy during rehearsal as folks (or animals) learn their routines.