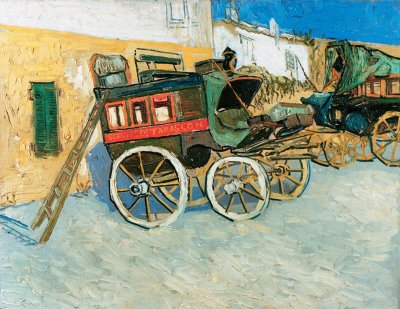 Vincent van Gogh painted Tarascon Dilegence as he waited for Paul Gauguin to come to Arles, France, and he continued his investigation of intense and expressive color. The red panels of this carriage, taken in ensemble with its green cab, represent the chromatic vitality he sought in his painting. But the heavy application of paint -- the sweeping strokes on the ground and the interlocking strokes on the wall -- reveal his deepening immersion in the act of painting on a surface that records every movement of his brush.