Creating a Basic Animation with Software 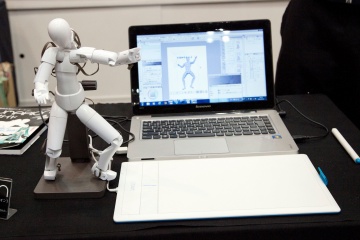 The real first steps should involve a lot of planning and design. You'll need a story, characters and settings. You may even want to storyboard out your whole cartoon. But whether you want to meticulously plan the whole thing or wing it as you go along, once you're ready to start, there are some basic steps to get you animating.

You'll likely need to set the frame rate (the number of frames that will play per second) and the dimensions of your animation (often, but not always, in pixels). You might also want to set the length of your animation (either in time or in frames). The settings depend in large part on what medium you are animating for (TV, theatrical release, web video or banner ad, for example) and how you want the final product to look.

Frame rate will determine how many frames you have to create for each second of playtime and will affect how smooth the final animation appears. Some standard frame rates are 24 frames per second (fps) for theatrical film, 25 fps for PAL video and 30 fps for NTSC video (U.S. standard format). Something lower, like 12 or 15 frames per second, can be used to decrease the number of frames you or the software will need to fill. You can go even lower, but the lower you go, the more jumpy the animation will look. You may even want to do something called "animating on twos," where you keep a 24 fps setting but only animate every other frame. The rest of the frames will just be copies of the previous frame.

The easiest way to start animating is to create a simple object using your software's shape or draw tools (or import one created or saved elsewhere), put the object somewhere in your working area and insert a keyframe into the timeline (the method of inserting keyframes will vary by software, but you can usually do it using a drop-down menu or quick key combination). Then drag the same object to a different position and insert a new keyframe somewhere farther down the timeline. You might have to tell the software to create a motion tween or something similar, or it may do this automatically. A tweenis an object you can put into two different frames and the software will automatically create the frames in between to get your object from point A to point B.

When you scrub across the timeline or play your animation, you will see your object move from the first keyframe to the next. And so you have your first animation, albeit a short and simple one. Rather than moving the object to a new position, you could also change the parameters on the object from one keyframe to the next, for instance, scale the object down or make it a different color. In those cases, rather than see the object move, you'd either see it shrink or slowly change color. And some programs will let you place two different shapes or objects in two keyframes, and the software itself will figure out all the in-between frames to morph one into the other. You can add more keyframes and manipulate your object further to make the motion, or morphing, continue until you have a longer animation.

Those are just some very basic steps to make something move or change on screen. You can use all the tools available in the software to build more complex objects and make them go through complicated motions and interact with one another. There are a lot of bells and whistles in most animation software that you can use to add to or enhance your final product.