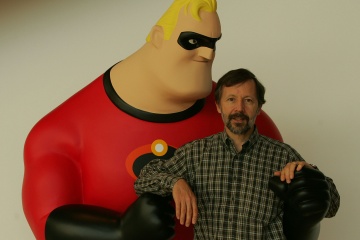 In 1962, MIT Ph.D. student Ivan Sutherland gained temporary access to an old TX-2 computer. The TX-2 was a giant multitasking mainframe created in the 1950s that was used for military applications, air traffic control, payroll and census processing, and various other tasks. The TX series machines were some of the first computers to have monitors. Sutherland used it to create a program called Sketchpad, which enabled the user create line drawings and make them move on a computer screen with a light pen and tablet. It was, in effect, the first interactive animation software. Although conceived for engineering applications, he noted in his dissertation that "it might be exciting to try making cartoons." He even drew a face with an animated winking eye as part of a demo [source: Sito].

But it would be a while before anyone was creating animations with user-friendly software applications. Most computer graphics for the next couple of decades were created by people with programming skills and access to expensive government, corporate or university mainframes. One early wireframe animation of a satellite orbiting a planet was created by Edward E. Zajac for Bell Labs around 1963 using the FORTRAN programming language. The first 3-D rendered movie, a short called "A Computer Animated Hand," was created in 1972 by Ed Catmull and Fred Parke at the University of Utah. It featured a moving wireframe hand and face, as well as those same models covered in smooth skin. Not surprisingly, Catmull would go on to co-found Pixar.

A one-time student of Ivan Sutherland named Jim Blinn did some of the earliest television CG work while working for NASA's Jet Propulsion Laboratory (JPL). First, he made realistic computer animations of the Voyager missions that aired on news programs starting in 1979, and then he and his team at the JPL contracted to do graphical renderings for Carl Sagan's 1980 PBS series "Cosmos." (Blinn would later develop "Blinn shading" and an enhancement to texture mapping called "bump mapping.")

It wasn't long before some of the top computer graphics talent started working in the film industry for outfits like George Lucas's movie special effects powerhouse, Industrial Light and Magic (ILM), originally created to do special effects work for "Star Wars." Jim Blinn and Ed Catmull both worked for Lucasfilm, though at different times. It was while Catmull was there in 1986 that Steve Jobs purchased Lucasfilm's Computer Graphics Division and it became Pixar. Pixar's "Toy Story" (1995) was the first completely CGI full-length film.

Both ILM and Pixar, along with other emerging computer graphics houses, would develop lots of technical innovations for use in computer animation, some of which eventually filtered into commercially available software. The advent of small, affordable personal computers was another major step that made this possible. Computer animation is now routine in television, movies and advertisement, and it's entirely possible to create in your own home.