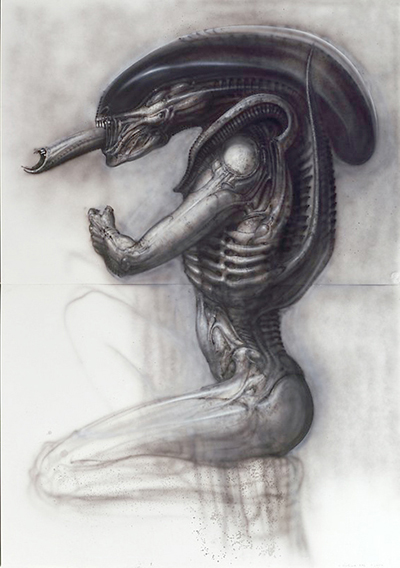 The adult xenomorph is a deadly creature. In addition to superior strength, speed, dexterity and cunning, the organism also demonstrates an array of offensive adaptations that include sharp claws, a spiked tail, razor-sharp teeth and a pharyngeal jaw.

This secondary jaw emerges from an organism's pharynx, or throat. Here on Earth, we see this adaptation in the aquatic moray eel. The eel catches prey in its outer jaw and then extends a secondary set of teeth to grasp the food and pull it down the throat. This pharyngeal jaw normally remains folded away when not in use.

The xenomorph's pharyngeal jaw works similarly. The alien's secondary set of teeth rest on the end of a bony appendage that extends from the mouth and retracts into the throat. The xenomorph can extend this "tongue" with terrific force, easily puncturing the flesh of an adversary. The creature can then pull back the deadly tongue (leaving a gaping wound in its prey), or it can bite down with the small pharyngeal jaws and reel its victim into the primary jaws.

Xenomorphs also occasionally spit their corrosive blood at adversaries, another tactic in keeping with terrestrial biology. When threatened, vultures spit stomach acid and camels spit partially digested cud. Horned lizards spray blood from their eye sockets, and the armored ground cricket hemorrhages it through cracks in its exoskeleton.

Of course, as the xenomorph inevitably acquires genetic attributes from its hosts, various other offensive and defensive adaptations are possible. What would happen if a facehugger implanted an embryo inside an elephant? Let's hope we never have to find out.

What beautiful eyes you have!

How does a xenomorph "see" the world around it? Some theories propose that the entire surface of the creature's smooth, phallic head functions as a great eye. Others argue that the xenomorph is blind and depends on sound, smell, touch and/or pheromone reception. Interestingly enough, H.R. Giger's earliest designs for the adult alien featured a pair of large, black eyes at the front of its skull -- eyes that Ridley Scott ultimately found too humanizing [source: Nathan].