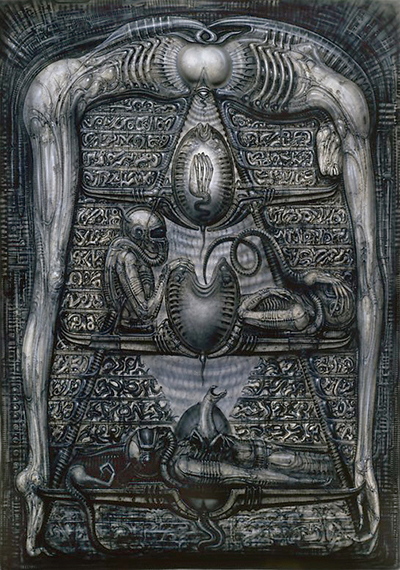 At this point in the xenomorph life cycle, we find the embryo gestating inside the chest of its host, as some terrestrial insects have been known to do.

The parasitic wasp Cotesia glomerata uses its ovipositor (stinger) to pump eggs into the bodies of caterpillars. Up to 60 of these eggs hatch into hungry larvae, which eventually account for 30 percent of a host organism's body weight [source: Fabricius]. The larvae drink the caterpillar's fluids but avoid damaging vital organs. The Dinocampus coccinellae wasp goes even further, chemically modifying a host ladybug to "guard" the larva that bursts from its abdomen.

Why does the host's immune system allow this to happen? Parasitic wasp larvae use a virus-mimicking poison to shut down a host's immune system, thus keeping the caterpillar's natural defenses from fighting the intruders [source: Callaway]. The xenomorph embryo seems to work in a remarkably similar way, fooling the host's body into ignoring or accepting the foreign organism.

As the xenomorph embryo grows inside the host and feeds off its blood, it also virally assumes genetic characteristics of the host. For instance, the bipedal xenomorph encountered by the Nostromo crew displayed attributes of both its human host and the extraterrestrial pilot encountered aboard the derelict spaceship [source: Nathan]. Subsequent xenomorph encounters demonstrated that embryos gestated inside quadrupedal hosts such as dogs or cattle emerged as four-legged adults.

In any event, this gene-swapping always benefits xenomorph survival. While the emergent adult retains all its inherent strengths, it also takes on host qualities that may aid it in navigating a new environment and overcoming prey.

Once an embryo develops into its larval chestburster stage, it abandons the host organism and flees to safety. Since it's nestled inside the chest cavity, the creature lacks easy access to a bodily orifice and therefore emerges by violently punching through the host's rib cage.

The Nostromo chestburster featured a serpentine body, lacked legs and possessed only rudimentary arms -- a true larval stage. However, the chestburster encountered on the penal colony Fiorina 161 emerged from its quadruped host as a smaller, adolescent adult. In this scenario, we can only assume that host genetics played some role in dictating the creature's emergent form.

These differences lead to a question we'll explore again later: To what extent is the xenomorph formless? Is it a true species or something much stranger?

The final xenomorph design in "Alien" stems largely from H.R. Giger's 1976 painting "Necronom IV," which portrays a biomechanical being with a highly phallic cranium and a cadaverous sex organ. In fact, upon seeing the finished creature for the first time, star Sigourney Weaver remarked, "It's a giant penis" [source: Nathan].