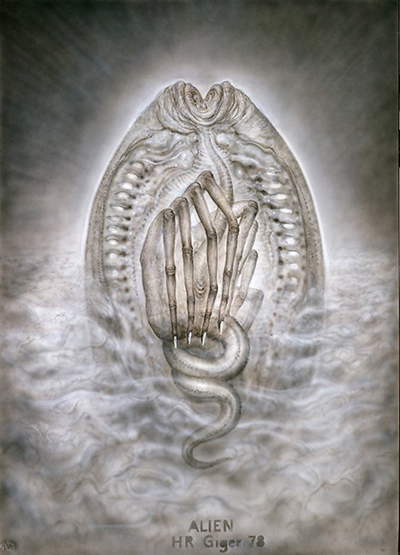 The facehugger raises several tantalizing questions about the xenomorph life cycle. Is the facehugger truly a prelarval stage at all? The creature that emerges from the egg is little more than a highly aggressive delivery system for the embryo, which must then gestate inside a host body while the facehugger itself crumples up and dies.

Perhaps the facehugger is no more a true xenomorph than a sperm cell is a human being. Is it merely a mobile sex organ intent on penetrating a suitable mate/host?

This fantastic notion isn't entirely without precedent among terrestrial organisms. Here on Earth, the male argonaut (or paper nautilus) uses a specialized, detachable tentacle called a hectocotylus to deliver sperm to a female. Once detached, the spermatophore-laden tentacle can swim freely but is unable to seek out a female on its own [source: Orenstein]. Fittingly, marine biologists initially mistook the hectocotylus for a parasitic worm.

Of course, the "embryo" that a facehugger delivers is rather atypical. As we'll discuss, the ultimate form of the xenomorph depends greatly on the host organism in which it gestates. While many Earth species of parasitic wasps implant eggs or larva inside the bodies of host insects and spiders, the young wasps merely feed on the host organisms -- they don't benefit from them genetically.

The implanted xenomorph embryo, however, blurs the line between parasite and offspring.

H.R. Giger completed several paintings of the alien facehugger before the filmmakers settled on the design seen in the finished film. Some of the earliest renderings depicted larger, vaguely avian creatures. One painting even featured a facehugger with a single, gray eye in the center of its back, giving the host the appearance of a Cyclops.