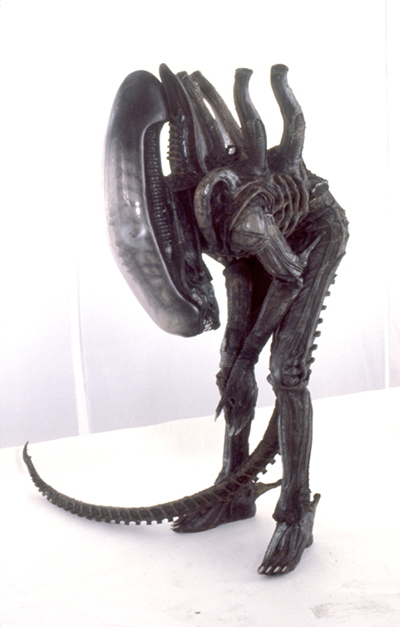 Once free of its host, the chestburster xenomorph undergoes a rapid growth spurt, shedding skin and accumulating mass at an astonishing rate.

The Nostromo xenomorph reached full adulthood and a height of 8 feet (2.4 meters) in a matter of hours. Even more remarkable, the creature managed this growth without feeding on its previous host or devouring a single crew member. This fact would seem to violate the law of conservation of mass, so we can only assume the chestburster gorged itself on food stores found elsewhere in the ship.

Fast growth spurts are common among terrestrial life-forms. The sooner an organism reaches full size, the sooner it can fend for itself in a hostile world. For instance, a newborn blue whale grows at a rate of 200 pounds (91 kilograms) per day consuming its mother's milk [source: National Wildlife Federation]. Given enough food, the alien's rapid maturity is well in keeping with terrestrial biology.

Once fully mature, the xenomorph can certainly fend for itself thanks to several adaptive advantages. For starters, it seems to benefit from a dual skeletal system. Terrestrial skeletons fall into three categories: endo- (internal), exo- (external) and hydrostatic (fluid-based). Each system comes with certain strengths and weaknesses. Exoskeletons offer enhanced protection and muscle leverage, while endoskeletons are stronger and allow for more flexibility.

There's also a size limit for exoskeleton systems. Despite Earth's vast populations of chitin-armored creatures, no specimen approaches the size of an adult xenomorph. After all, a true exoskeleton isn't just a suit of armor -- it's a scaffolding for the creature's internal systems. The larger the organism, the thicker the exoskeleton required, until further growth becomes morphologically impossible.

So how can an adult xenomorph even stand, let alone move at such incredible speeds? According to Chapman University biologist Frank Frisch, the creature likely possesses partial endo- and exoskeletal systems [source: 20th Century Fox]. While the upper torso benefits from an exoskeleton's defensive durability, the lower body depends on an endoskeleton's strength and flexibility.

That skeleton imbues the xenomorph with amazing durability, but its circulatory system offers an even greater defense: highly acidic blood. Once spilled, this fluid burns rapidly through inorganic material and liquefies human flesh on contact. The acidity neutralizes shortly after exposure, but not before dishing out extensive damage. Naturally, the xenomorph is impervious to harm from its own corrosive fluids in the same way that our stomach linings protect us against our own stomach acid.

The xenomorph's intelligence also grants it a key defensive advantage. In various encounters, they've been proven to possess not only a sharp animal cunning but also a certain capacity for vicarious learning and problem solving. When xenomorphs overran a terraforming colony on LV-426, colonial marines reported that the creatures manipulated doors and elevators and may have intentionally cut a power cable.

Although the creature's defenses are impressive, its offensive weapons truly define the species.

What might the monster in Ridley Scott's "Alien" have looked like without the artistic vision of H.R. Giger? Designer Ron Cobb took an early crack at the design and sketched a hook-clawed, four-legged insectoid [source: Nathan]. Screenplay writer Dan O'Bannon suggested "an oversized, deformed baby," and Scott himself considered throwing a monster costume over a man with two children strapped to his torso [source: Giger].