by the Editors of Publications International, Ltd. & Laurie L. Dove
Prev NEXT
3 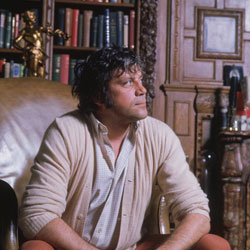 This portrait of Reed was taken in his home (Broome Hall, previously a monestary, near Dorking in Surrey, England) around 1980.
Keystone/Stringer/Hulton Archive/Getty Images

Oliver Reed, as famous for drinking and partying as he was for acting, died in a pub on May 2, 1999, before he could finish filming Ridley Scott's battle epic, "Gladiator."

Reed, who was 61, collapsed on the floor of a bar in Malta and died of a heart attack after reportedly besting several Royal Navy sailors at arm wrestling and consuming copious amounts of rum, beer, whiskey and cognac.

Most of his scenes in "Gladiator" had already been shot when he died, but Scott had to recreate Reed's face digitally for a few remaining segments. The Internet Movie Database estimated the cost of the digital touch-ups at $3 million. When "Gladiator" was released in 2000, it grossed more than $187 million in the United States alone and snared five Oscars, including Best Picture. The movie's success became the pinnacle of Reed's career, which included more than 60 films [source: Chan, The Internet Movie Database].