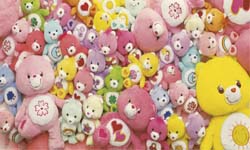 The popular plush toys started out as greeting card characters but grew into film and television.
American Greetings

Believe it or not, the Care Bears started as a greeting card design, developed by American Greetings in the early '80s to sell cards and gifts. It wasn't until 1982 that someone decided the concept might work well as a toy, and a line of 10 plush bears was introduced to instant success. In just their first five years, the Care Bears line drew in more than $2 billion -- yes, billion -- in retail sales as kids clamored for the fuzzy, cheerful plush toys [source: American Greetings]. This impressive level of sales was no doubt helped by a 1985 animated feature film and animated series starring the Bears. More than 40 billion bears flew off store shelves by 1987, and the line is still going strong more than three decades after its introduction [source: Care-Bears.com].

Mattel launched the Hot Wheels line -- a series of miniature diecast metal cars -- in 1968. Despite a toy car market already dominated by the popular Matchbox line, Hot Wheels was an instant success. A 1969 animated series helped promote the brand, and the company sold more than 4 billion cars over the next 40 years [source: Hot Wheels Media]. The toys have reached such iconic status that some collections are valued in excess of $1 million. In 2013, Legendary Pictures tapped director Simon Crane to take the reins on a live-action movie inspired by Hot Wheels' rich history [source: Chitwood].

When a pair of comic fans created the first Teenage Mutant Ninja Turtles comic in 1983, they had no idea they had created one of the most successful toy brands of all time. The comic sold quickly, and drew the attention of the Playmates toy company. Playmates created a simple 5-part cartoon mini-series featuring the pizza-loving turtles in 1987. When the series was a success, the company quickly launched a line of TMNT action figures. Over the next four years, Playmates sold more than a billion dollars worth of turtle toys to eager kids, and more than 400 different action figures were released over the next decade [source: Lammie]. The original mini-series was expanded into a full cartoon series, which stayed on the air through 1996. A 1990 live action film made $200 million in ticket sales, while a 2014 live-action TMNT film picked up almost $100 million its opening weekend, bringing the heroes in a half shell -- and their toys -- to a whole new generation of kids [source: Lang].