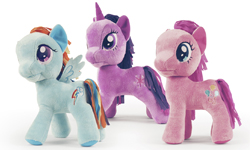 For more than 30 years, My Little Pony dolls have captivated audiences with tie-in animated series.
Licensed by Hasbro/Manufactured by Funrise

The earliest toys were deceptively simple and made from wood and other materials found around the house; popular toys from a century ago were designed purely for play. Even half a century ago, there was little thought of releasing toys based purely on whether or not they could support an animated series or motion picture. Today, toys are big business, and many end up spurring major franchises, inspiring TV shows, films and entire lines of non-toy merchandise. Read on to learn more about some toys that started small and went on to become big brands, eventually bringing in millions or even billions of dollars to their creative and manufacturing teams.

Mattel produced the earliest versions of My Little Pony during the 1980s, enjoying modest sales until the franchise expanded into a full-fledged entertainment empire. MLP sales totaled a respectable $25 million in 1983; when the company released its first television special the next year, sales more than tripled to $85 million. By 1985, My Little Pony toys sold in excess of $100 million annually. A 1986 animated series helped the company sell more than150 million of the pastel-hued horses by the end of the '80s [source: Seiter]. The series enjoyed numerous revivals over the years, but interest truly peaked with the release of a 2010 animated series "My Little Pony: Friendship is Magic." People of all ages tuned in to relive their childhoods, or fell in love with MLP for the first time. In 2013, fans could choose from more than 200 licensed MLP products, and the Ponies themselves had become one of Hasbro's best-selling lines [sources: Global License and McGrath]. A theatrical release inspired by the series is scheduled for 2017.

Xavier Roberts was a 21-year old student when he came up with the idea for Cabbage Patch Kids. He started selling the dolls at local craft fairs as Little People in the late '70s, and later at Babyland General Hospital in Cleveland, Ga. The dolls were so popular they eventually attracted the attention of toy maker Coleco. Once Coleco began mass-production of the Cabbage Patch Kids, they became the hottest toy around, resulting in full-on fights at toy stores across the country come Christmas time. The company sold more than 3 million dolls in 1983 alone, and by 1985, annual sales exceeded $600 million [sources: Townsend, A. and Townsend]. While the demand for Cabbage Patch Kids eventually died down, the toy is still going strong more than three decades later, with sales of $50 million a year as of 2014 -- and yes, you can still take a visit to Babyland General Hospital to witness the miracle of CPK birth the next time you're in Georgia.

Hasbro launched the G.I. Joe toy line in 1964, and by 1966, the military-style dolls were responsible for two-thirds of the company's profits [source: Stamp]. As interest in G.I. Joe waned, Hasbro discontinued the line in the late '70s, only to re-introduce it again a few years later. This early-'80s Joe took on a whole new image, with a hard plastic body and a much smaller size -- similar to the design of the original "Star Wars" action figures which ruled toy stores at the time. This time, Hasbro launched a cartoon series to help promote the brand and spur sales. The tactic worked, and G.I. Joe toys have remained in continuous production for more than 30 years. A 2009 film inspired by the toy took in more than $300 million worldwide, while a 2013 sequel made a cool $375 million [source: O' Connell].