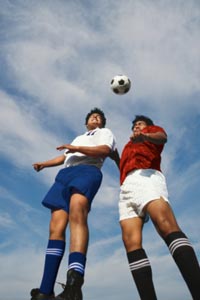 Whether you're a former high school varsity athlete or have never played organized sports before, joining an intramural league in college could be the perfect decision for you. College is a major transition for most students, and playing intramural sports is one way to help you through that transition.

For instance, some new college freshmen discover that they'll need to find the right balance between athletics and academics during their college career. Others find that they can't compete athletically at the college level. If you're in such a situation, keep in mind that playing on an intramural team means you won't have to sacrifice all the joys and rewards you love about organized sports.

But playing intramural sports isn't just good for the fun of it -- it allows you to reap rewards for your health, social life and even academic pursuits. We spoke with Abe Drabkin, the Director of Marketing for the National Intramural-Recreational Sports Association (NIRSA), who argues that intramural sports help students maintain health and wellness while managing stress.

Intramural (from the Latin for "within walls") refers to organized sports played within an area or institution, particularly colleges and universities. Multiple teams within one college will play against each other, rather than against teams from other colleges. Hence, it's not as competitive as teams affiliated with the National Collegiate Athletic Association (NCAA).

By 1950, NIRSA formed (then known as the National Intramural Association). It was conceived during a meeting with 22 African-American intramural directors. Drabkin explains that they wanted to provide sports-based opportunities for African-American students who lacked such opportunities at the time. It has since exploded in growth and now serves about 7 million students annually.

Next, we'll delve more deeply into the various benefits of playing intramural sports.

For lots more information on sports and fitness, see the links on the next page.