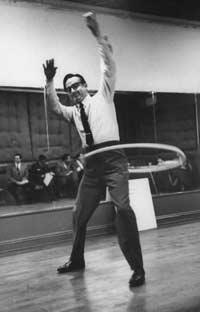 In 2009, Conan O'Brian will replace Jay Leno as the host of NBC's "The Tonight Show." For regular viewers of the program, this is a fairly big event, as Leno will have hosted for 17 years. But "The Tonight Show" has been around for much longer -- more than 50 years, in fact -- and has seen a variety of hosts, performers and guests.

The late night program debuted on NBC on Sept. 24, 1954, with Steve Allen as the first host. Simply called "Tonight," the show was a blend of comedy, interview, musical performance and general buffoonery that set the basic template for future late-night television. After Allen left to pursue other comedic goals in early 1957, the program went through several hosts and format changes. The network attempted a few news and magazine arrangements over the following months, but nothing really caught on until Jack Paar began hosting the show in July 1957 and reintroduced the studio interview format. Audiences reacted well to a variety of interesting guests, and Paar is best remembered as a talk show host rather than a comedian.

When Paar left the show in 1962, Johnny Carson took over and stayed on for 30 years -- an incredibly long run in show business -- and remains the most memorable host of "The Tonight Show." Carson's personality was the main draw for viewers, and he appealed to a broad American audience with his easygoing sense of humor and quick wit. His popularity was so evident that NBC wanted Carson to host the show five nights a week. This proved to be too much stress for Carson, though, and after the studio relocated from New York City to Burbank, Calif., in 1972, he agreed to work three or four nights a week. Guest hosts took Carson's place during his absence (usually on Monday nights), and celebrities and comedians, including Joan Rivers, David Letterman and Jay Leno, filled in on such occasions. Carson's final performance on "The Tonight show" aired on May 22, 1992, and was a national event, with an estimated 50 million people tuning in for an emotional goodbye. Leno took over after Carson's retirement, and "The Tonight Show," regardless of its host or gradually shifting formats, continues to entertain us well past our bedtimes.

For more information on "The Tonight Show" and related topics, check out the links on the next page.