How to Teach Kids to Play Tennis 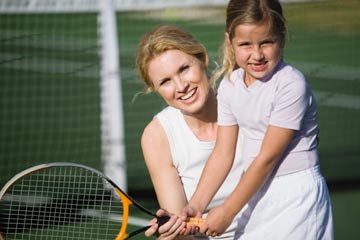 When teaching kids tennis, start by letting them hit balls with a racquet so they learn the feel.
© 2009 Jupiterimages Corporation

Teaching children is often easier when they have a desire to learn. But for kids to want to learn, the process needs to be fun. Whether you are a tennis coach or just want to pass your love of the game along to your children, it's important you don't begin by bombarding young children with the rules. Instead, start by simply bouncing some balls around.

Take your kids out to the backyard, driveway or park and toss a few tennis balls for them to hit with a racquet. And make sure their racquets are the right size -- a full-size racquet may be too large to handle, especially for young children. Smaller models usually will help children feel comfortable using the racquet. First, demonstrate hitting the ball, and encourage children to play and experiment with tennis equipment on their own [source: Whitbourne].

Children can bounce balls off a wall or the pavement, hit balls back and forth with you or even send them across the lawn for the dog to fetch. Ask children to see how many times they can hit the ball without letting it fall or how many times they can bounce a ball with a racquet without letting it get away from them. It doesn't matter what you do, as long as children have the opportunity to familiarize themselves with the equipment and develop an interest in the game.

Once kids are excited about tennis, they will be ready to learn basic tennis techniques. This is the time to teach them the difference between forehand and backhand shots, as well as how to serve the ball. You can also begin to dabble in the rules of the game. To learn more about explaining tennis to children, continue to the next page.

When teaching the basic rules of tennis to children, be sure they understand that the goal is to gain points by hitting the ball so that the opponent can't hit it back over the net and keep it inbounds.

Next, teach the rules for serving. Make sure the children know that when it is their turn to serve they will stand in the service area at the back of the court and aim diagonally across the net. A game always starts with a serve from the behind a player's baseline on the right-hand side of the court, and the serve must go over the net (without touching it) and land inbounds for it to count. After a point is scored, players move to the left, or advantage, side of the court for their next serve [source: Sports Know How]. Players continue this pattern of alternating serves from the right and then left sides throughout the game

When it's time to explain scoring, start with the basics: To score in tennis, the ball must touch the ground inside the boundary lines on your opponent's side of the court. The opponent can hit the ball back before it hits the ground or after it bounces once, but if he or she misses or if the ball bounces more than once, you score. If the ball is returned before it hits the ground, it is called a volley; if it's returned after it bounces once, it is called a ground stroke. No matter which player served, the person who last hit the ball inbounds will get the score [source: USTA Magazine].

The score-tallying system might seem confusing at first, but children just need to know that the first player to score at least four times wins the game. However, the winner must win by at least two scores, which means even if both players score four times, the game won't end until one person has earned two more scores than his opponent. So, the number of scores is what really counts, but it's important to note that each score is not worth the same number of points. A player earns 15 points for the first score, 30 for the second and 40 after the third. The fourth and final score is not assigned a number but merely referred to as "game" [source: USTA Magazine].

Children can play singles against one opponent or doubles with a partner against two opponents. The boundaries of doubles tennis are slightly larger than those of singles tennis, so be sure children know which lines on the court are considered in and which are out.

Once children understand how tennis works, you can begin teaching them fundamental skills. Read on for drills to help them improve their forehand, backhand and more.

Because a tennis player can win a game in as few as four scores, tennis matches are usually divided into sets of six games. Whoever wins the most games wins the set, but a player must win by at least two games.

Sometimes young students who are brand new to tennis need to get acquainted with the game before they even pick up their racquets, so try some drills to help them practice coordination. For example, have four children take the court as though they are about to play a doubles match. One child will throw the ball over the net diagonally, to the part of the court where a serve should land. A child on the other side of the net will either throw or hit the ball back, and the original team must then catch the ball. Once the team has caught the ball three times, they switch places and the other team will throw. This is a great way for kids who need help with coordination or the general concepts of tennis to prepare for further instruction [source: Drills for Tennis].

You may also want to use drills to practice basic skills such as controlling the ball and handling the racquet, which are necessary for decent forehand and backhand shots. Have the student stand on one side of the court while you stand on the other. Gently toss or hit a ball to your student and have him bounce the ball on the racquet once before hitting it back to you. This will help the student's coordination and also give him a feel for how hard the ball needs to be hit [source: Expert Tennis Tips].

Once a serve comes over the net, the player responds with a forehand or backhand shot, which might be difficult at first. To take a forehand shot, the player should face sideways, hold the racquet in his or her dominant hand, and swing it forward at waist level to make contact with the ball. For a backhand shot, a player will turn the opposite direction in order for his or her dominant hand to be closest to the ball. These can be difficult skills to master, especially because players should learn to use the strength of their entire bodies, not just their arms and wrists. To let young players practice their backhand and forehand shots, you might want to try simple drills such as standing across the court and throwing or hitting balls at them over and over so they can learn the stroke through repetition.

With knowledge of forehand and backhand strokes and the rules of the game, your students should soon be ready to play. For further information on teaching kids to play tennis, visit the links on the next page.

When waiting to receive a serve, instruct the student to stand in a ready position with both hands on the racket, facing forward with feet shoulder-width apart. This will allow the player to move in any direction and respond to the serve with either a forehand or backhand stroke.

What Are the Odds of a Hole-In-One?
How do you do a back flip in a wheelchair?
How does a pitcher warm up?