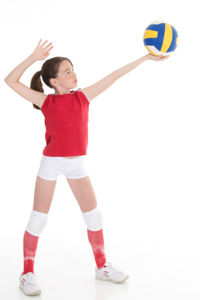 Volleyball is one of the most popular sports in the world. See more sport pictures.
©iStockphoto.com/dndavis

When you think about sports with a cult-like following, volleyball probably isn't at the top of your list. In fact, it may not be on your list at all. But in terms of participation, volleyball is actually the second most popular sport in the world [source: Westlake High School].

Volleyball has been around since 1895, when William G. Morgan, a teacher at the Young Men's Christian Association (YMCA) in Holyoke, Mass., decided to create a new sport that combined aspects of basketball, baseball, tennis and handball. The sport, originally called mintonette, eventually got its name from the way the players had to "volley" the ball back and forth over the net, and on July 7, 1896, the first game of volleyball was played [source: Couvillon].

But even if you've been playing volleyball for your entire life, coaching a team can be a completely different ball game, and it can be especially challenging at the youth level. How do you teach a group of fourth graders to deliver a killer serve? Well, before you work yourself into a sweat, take a deep breath and relax. Coaching can be a fun and rewarding experience, and with just a little bit of preparation and research, you can gather all the tools you need to put together a winning team.

On the following pages, you'll find information on volleyball skills, drills and coaching clinics to help you start the season off right. But first let's learn the basic rules of the game.

A good volleyball coach knows and understands the rules of the game. Parents can lose their cool, and referees can make mistakes, so it's up to the coach to make sure the game is fair. To play volleyball, you need a court, a net, a ball, two teams of players and a referee. Older children usually play on a 30-by-60-foot (9-by-18-meter) court, while younger children may play on a 25-by-50-foot (7-by-15-meter) court. Six players from each team play on the court at a time; however, some leagues play with just four players from each team [source: Westlake High School].

While rules can vary from league to league, the United States Youth Volleyball League (USYVL), an affiliate of the USA Volleyball League, uses the following basic rules for playing youth volleyball.

The referee of the game signals each serve of the ball. The server stands behind the end line and hits the ball over the net into the opposing team's court. Once a child serves the ball, the opposing team must return it in no more than three hits. Other than on a serve, a ball that hits the net is still in play, but players cannot touch the net at any time. Players in the front row can try to block a ball as it comes over the net, but they cannot block during a serve [source: USYVL].

Play will continue until the ball touches the ground, the ball goes under the net, the ball goes out of bounds or a player commits a fault. Examples of faults include the following: a team touching the ball more than three times, a player hitting the ball twice in a row, an illegal serve, an illegal block, a player touching the net or reaching under the net, or a ball landing out of bounds. A ball that lands on a boundary line is considered "in" [source: USYVL].

Once a volley ends, the team that won the volley rotates clockwise. A side-out occurs when the serving team loses the volley and turns possession of the ball over to the other team. The team that reaches 25 points first wins the game [source: USYVL].

If you want a killer team, play by the rules and show good sportsmanship. Read the next page to learn about teaching basic volleyball skills.

Want to be the coolest coach in the league? Show off your stuff with some volleyball slang:

An important part of coaching is teaching your players the basic skills they need to play the game. In volleyball, all players should learn how to serve, set, pass, spike, block and dig the ball. If you're not sure what all of these terms mean, don't sweat it. Check out these brief descriptions to help get your head in the game.

Even if your players are all beginners, remember that practice makes perfect. Keep reading to learn some volleyball drills that will get your team ready to play.

Are You Being Served?

According to Dr. Gil Fellingham, a professor at Brigham Young University and a consultant for

the men's volleyball team, the ability of a team to deliver strong, hard serves is what makes or breaks games [source: American Volleyball Coaches Association]. Time to get practicing!

The first step in putting together a winning team is to help your players master the fundamentals of the game, and volleyball drills are a great way to whip your team into shape. By repeating a series of drills during each practice, your players can begin to master basic skills and build strength. Try to incorporate a variety of drills that focus on different aspects of the game, from serving and setting to passing and blocking. Below are a few examples of some simple drills to help you get the ball rolling.

The best volleyball players know how to make strong, hard contact with the ball by creating topspin. Topspin on serves and spikes is an important part of helping your team stage an effective offensive attack. A good drill for practicing this skill is to have each player stand a few feet (1 m) from a wall while holding a ball with both hands above his or her head. Players should throw the ball toward the floor with enough forward spin so the ball hits the floor, bounces off the wall and comes back to them in the starting position above their heads [source: Dearing].

For blocking practice, have two of your players stand on chairs about 10 feet (3 m) apart, holding a ball just above the net. One at a time, players stand on the other side of the net and move back and forth between the two balls, jumping and extending their arms to block each one. After 15 to 20 reps, rotate your players [source: Scates].

To practice passing, you can have two of your players stand with their backs against the net and underhand toss balls to their teammates. Players must shuffle left and right and return the balls to the throwers using a forearm pass [source: Scates].

With a little practice and a lot of hard work, these drills will give your team the edge it needs to beat the competition. Read the next page to learn about coaching clinics that will help you prepare for game day, too.

The key to any successful relationship is communication -- and this goes for your volleyball team, too. A good rule of thumb is to teach your players that if they want to make contact with the ball, they have to talk first. Players should call "mine" or "got it" before hitting a ball and call out the name of a teammate before making a pass [source: Dearing].

It takes a lot of hard work to be a great volleyball player, but being a great coach isn't easy either. In addition to teaching your players the skills and techniques they need to play the game, being a great coach means acting as a role model for your team, practicing good sportsmanship and motivating and encouraging your players to continue to improve. If you're looking for a way to pump up your coaching skills, attending a volleyball-coaching clinic is an excellent place to start.

Each year, USA Volleyball hosts a clinic for volleyball coaches at the U.S. Olympic Training Center in Colorado Springs, Colo. The clinic costs $425 for U.S. citizens and $500 for noncitizens and includes discussions by the head coaches of the U.S. Women's and Men's National Team on such topics as serving and passing, offensive and defensive tactics, and different coaching styles. The clinic focuses on helping coaches develop strategies and techniques for handling various situations both on and off the court [source: Kauffman].

If that sounds a little too intense for a youth volleyball coach like you, the great news is that there are volleyball associations throughout the country that offer clinics for coaches at every level of the game. For example, the Minnesota Volleyball Coaches Association puts together an annual clinic for coaches at the junior, high school and college level to discuss drills, rule changes, the challenges of coaching and other relevant topics [source: Minnesota Volleyball Coaches Association]. Check out your local park district or volleyball association to find out about coaching clinics in your area.

For more information on coaching youth volleyball, see the links on the following page.

Coach of the Year

What Are the Odds of a Hole-In-One?
How do you do a back flip in a wheelchair?
How does a pitcher warm up?