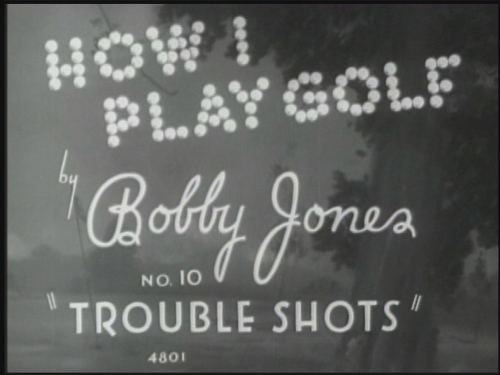 The equipment and terminology of golf have changed a great deal since 1930, the year when amateur phenom Bobby Jones won all four major tournaments in one year. Today's golfers might not even recognize the names of some of the clubs Jones used, like "Niblick" and "Spoon." Jones' clubs were made of Hickory wood. The most popular clubs on the market today are made from materials like titanium, graphite and steel. The size and shape of golf clubs have changed dramatically, as well. In the last decade alone, the average size of a driver head has doubled from approximately 200 cc's to more than 400 cc's.

The newly re-mastered DVD box-set editions of the 1930s instructional films "Bobby Jones: How I Play Golf" and "Bobby Jones: How to Break 90" provide a fascinating window into the game's past, illustrating what has changed and what has remained the same. While the equipment, style of dress and manner of speaking on display in the films are all different from those of today, the techniques Jones teaches are as helpful to today's golfer as they were to those who played the game in Jones' time.

This HowStuffWorks article explores the Bobby Jones short instructional films, how they came together and the ways they are still useful to golfers today. 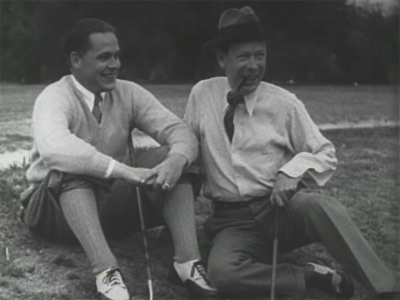 After winning the "Grand Slam of golf" -- the USGA Open, USGA Amateur, British Open and British Amateur competitions -- in 1930, Jones became a national celebrity. Convinced of his star power and his appeal to the everyman, Warner Brothers signed him to produce a series of instructional films bringing basic golf techniques to the silver screen. George Marshall, director of the famous "Perils of Pauline" serial, was chosen to direct the Bobby Jones series. If you've ever seen a cartoon or TV show where an evil, mustached character ties a young woman to railroad tracks, then you've seen a distant cousin of "The Perils of Pauline." O.B. Keeler, Jones' personal beat writer and biographer, went to Hollywood with Jones to write the films.

Jones wanted to take on the game of golf club by club -- to show the viewer each successive piece of equipment in the context of a real-life hang-up or common mistake. Each episode starts with a skit performed by the biggest stars of the time, including W.C. Fields, Edward G. Robinson, James Cagney and Douglas Fairbanks. The skits are based on humorous, stereotypical characters of the time, like the boss who is always sneaking off to play golf and the nagging wife who turns out to be smarter than the husband. Jones makes an appearance as himself, a concerned onlooker ready to help solve whatever golf problems come up for the main character in each skit.

Jones recalled, "There was a story line in each episode, but we didn't have a script -- they made it up as we went along. The plots wound up at the end of each 10-minute short and there was a lot of horseplay and comedy, with the instructional business woven in."

The skits are as interesting as the golf lessons for their examples of old-school trash-talking and a bygone lifestyle that involved tobacco pipes, fedoras, pressed white shirts, v-neck sweaters, argyle socks and short pants. In addition to the lessons on golf, the skits teach us that in the '30s, trash-talking was an art form. These old duffers have a way of getting under each other's skin with plain, profanity-free language. The practice of being aggressively smug seems to be a lost art.

Get the DVD Set 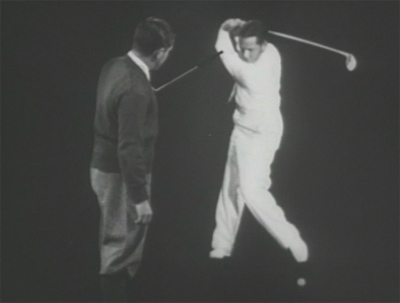 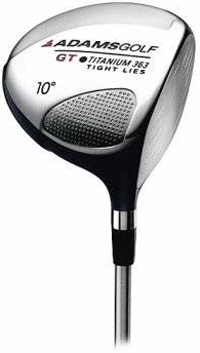 Today, golf clubs are made of titanium, graphite and steel. These materials let club makers control the precise weight balance of a club to create light clubs that deliver the right amount of force to the ball in the right place. The lightness of these materials also allows club designers to make the heads very large and therefore more forgiving when a swing is less than perfect.

In Jones' day, club heads and shafts were all made of wood. There's not much you can do to wood other than change its outside shape in order to affect how it makes contact with the ball. Its weight-to-size ratio is a constant. Wood clubs with heads the size of today's metal heads would be so heavy as to be unswingable.

Further, club shafts made of wood are inconsistent. Since wood grows organically, and no two trees or even pieces from the same tree are identical, no two club shafts had exactly the same swing characteristics. Expert clubmaker Jesse Ortiz, developer of the revolutionary TriMetal fairway wood technology and now chief club designer for Bobby Jones Golf, describes some of the problems with the wooden club shafts of Jones' era:

In those days, with Bobby Jones, if you found a driver that you liked, you held on to it forever. You couldn't put that shaft on another club head. They were nailed and glued to a wood head, and you'd destroy the shaft if you tried to ... so if you found a club that you really liked, it was obvious [its] flex characteristics were perfectly suited to your swing. And you could go out and hit 50 others that were supposed to be identical but none would perform like the one you had ... Today, graphite shafts are much more consistent. The torque is much tighter, and you have these really tight shafts that allow you to put more weight in the head but overall the club is really light. 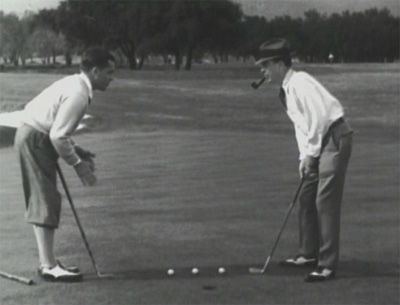 Although everything from the clothes to the terms to the materials making up the clubs and balls themselves have changed greatly in the past 75 years, what Jones teaches in his 1930s films are the same techniques that define a good golf game today. Evolving ball, driver and wood technologies have brought great advances in the distance and consistency golfers expect from their clubs, but what makes a drive land in the right place or a putt fall into the cup has not changed. Although the average drive distance has improved greatly over the years, the average golf handicap has remained fairly consistent.

As Ortiz explains, the game from 100 yards in is still the same. No matter how far a golfer can drive the ball off the tee, he must still rely on skill and finesse to get the ball into the cup:

The closer you get to the hole, the more skill and practice comes into the game. The finesse game can only be improved with lots of practice ... Bobby Jones would be a champion today like he was then. It's in the swing, and you've gotta practice your swing. Golfers like to think that they can buy a game, but that's not true. You can buy some improvement, but the bottom line is you have to invest in time and practice to score better.

For more information on golf technology, the Bobby Jones instructional DVDs and related topics, check out the links on the next page.

Who built the first miniature golf course?
Why Do Golf Balls Have Dimples?
Winning the Green Windbreaker: Inside the Real World of Pro Mini Golf