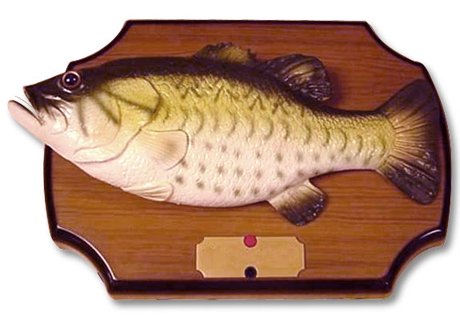 Lately it seems that every time you turn around, there's a fish singing a song to you! Boogie Bass, Big Mouth Billy Bass, Rocky Rainbow Trout and other variations have become enormously popular as novelties and gag gifts. You've probably seen one at a store in the mall, at the flea market or on television. Looking deceptively like a normal stuffed fish mounted on a plaque, it is actually a robot that begins to sing and move when someone walks up to it. As the fish swings his head out from the plaque, he lip-syncs to a prerecorded 30-second clip of a popular song or spits out a savvy one-liner. For the unsuspecting viewer, a singing mounted fish can be quite a humorous surprise, which seems to be the key to its charm.

A Note to Our International Readers

If you live outside of the United States, you are probably unfamiliar with the singing fish we are discussing in this article. You may, in fact, think it is the most ridiculous thing you have ever seen! Like the Pet Rock of the early 1980s, the singing fish is a fad -- in true American fashion!

In the U.S. there is no escaping the singing fish right now. Sales are brisk, with many dealers routinely selling out. And it really is a neat little piece of engineering and creativity! In this edition of How Stuff Works, we will open up one of these fish and take a look inside. What makes him sing? How does he move? How does he know when someone is standing in front of him? We will answer all of these questions as we explore the robotic mechanism that brings these fish to life!

The fish is singing. 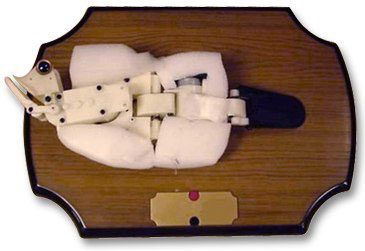 Foam padding is used to flesh out the framework.

The singing fish is actually a very simple robot. It has its own power supply, it senses its environment and acts autonomously on what it senses, it moves in fairly complex patterns (a singing fish is actually more complicated than some of the pick-and-place robots that you find in factories), and it vocalizes -- in other words, it meets all of the qualifications of a robot!

In the following pictures, we have removed the latex rubber outer layer to look at the underlying mechanism. What you find is a surprisingly complicated articulated plastic framework driven by three small DC motors:

Plastic skeleton of the fish.

Here is a close-up of one of the motors:

This electric motor is used to move the jaws and simulate the singing.

When power is supplied to the motor, the lower jaw opens. As soon as the motor stops, a spring causes the jaw to close. By starting and stopping the motor repeatedly, the jaw opens and shuts, making it appear as if the fish is singing. All three of the motors work in this way -- applying power to them moves the associated body part in one direction, and the spring moves it back.

This electric motor moves the tail section in time to the music. Just like the motor operating the mouth, the tail motor causes the tail fin to move out away from the plaque and a spring makes the tail fin snap back when the motor stops. 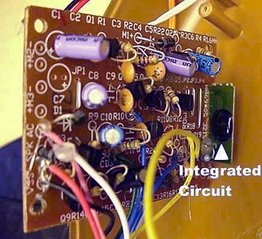 The circuit board -- the "brain" of the fish

Inside the plaque there are five different components that control the fish:

The photos below show these components in detail. Here is the logic board -- the "brain" of the fish:

The circuit board contains an integrated circuit (IC) that controls the motors and also contains the songs in a digitized format (see How CDs Work for information on digital music storage). There is one minute of music on the chip, although it is not the highest quality. There are probably 8,000 samples per second at 8 bits per sample stored on the chip, or almost half a megabyte of data! The chip synchronizes the movements of the mouth, tail and body to the beats of the music. It does this by sending carefully timed, short bursts of power to the electric motors. The transistors that you see on the circuit board amplify the chip's signals so there is enough power to drive the motors (or the speaker).

This electric motor on the back side of the skeleton swings the entire front end of the fish out from the plaque, toward the viewer. Once again, a spring is used to return the front end to its original position once the motor stops. There is a photoreceptor cell near the bottom.

Whenever a person or object passes in front of the fish, light is blocked from hitting the photoreceptor. The photoreceptor then sends a trigger to the IC telling it to begin. Also wired into the circuit board is a manual pushbutton switch, located just above the photoreceptor. This switch does not cut power directly -- instead it sends a signal to the chip. If you try to turn the fish off in the middle of a song, the fish will actually complete the song before turning off!

This small speaker on the back of the plaque reproduces the music sent to it by the IC. The battery compartment contains four C batteries, and there is a plug for using an AC adapter.

It is true that a singing fish doesn't do anything useful, but even so it is a pretty amazing piece of technology!

Why Exactly Is May 4th a 'Star Wars' Holiday?
10 Most Spectacular Lottery Burnouts
Impressionism