Rotoscoping in Other Animations 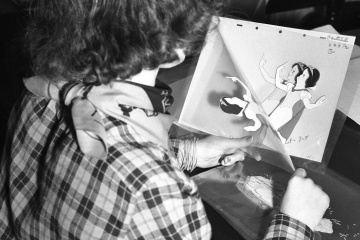 A Disney animator working with on a character motion sequence for “Snow White and the Seven Dwarfs” circa 1936.
© Earl Theisen/Getty Images

The first American full feature length animation was Disney's "Snow White and the Seven Dwarfs." Before it was animated, reference footage was taken of actors performing on rudimentary studio sets in costume, including young dancer Marjorie Celeste Belcher (later known as Marge Champion) as Snow White, dancer Louis Hightower as the Prince, comics Eddie Collins and Billy House as Dopey and Doc and actor Don Brodie as the disguised queen. They then rotoscoped key frames at the beginning and end of character actions and animators elaborated the characters and scenery and created all the in between shots on transparent animation cels.

The technique was also used in "Peter Pan" with footage of several actors, including Hans Conried as both Mr. Darling and Captain Hook, Buddy Ebsen as a pirate, dancer Roland Dupree as Peter Pan and Margaret Kerry as Tinker Bell. It was employed in some other Disney films, as well.

Although it was put to good use, rotoscoping wasn't always well received. As we mentioned earlier, some considered it a cheat or shortcut, and others complained that characters modeled on live actors differed in look and movement from other moving characters, such as traditionally animated animals. Disney even tried to hide the use of rotoscoping in "Snow White and the Seven Dwarfs" to an extent. At the premier, they seated Belcher in the balcony away from the crowd and told her not to discuss her role in the film. She apparently didn't know that the footage taken of her was rotoscoped, and learned about the process decades later when she visited a Disney exhibit about the movie. Whatever techniques were employed to make it, the film was undeniably a masterpiece of animation and has become a classic.

And it was far from the last cartoon to use the technique. Some have used much heavier rotoscoping, resulting in movies that look like film footage that has been painted. The "Lucy in the Sky with Diamonds" segment of the Beatles' "Yellow Submarine" (1968) included some obvious rotoscoping. And animator Ralph Bakshi employed the technique in several films including "Wizards" (1977), "The Lord of the Rings" (1978), "American Pop" (1981), "Fire and Ice" (1983) and "Cool World" (1992). Columbia Pictures reportedly downplayed the use of rotoscoping in "American Pop" upon its release.

A-Ha's video for their song "Take On Me" in 1985 also used rotoscoping to memorable effect, alternately showing people in live-action footage and sketchy comic book animation. That same year, it was used in INXS's "What You Need" video to add animation and color effects.

More recently, Richard Linklater's movies "Waking Life" (2001) and "A Scanner Darkly" (2006) were both filmed with live actors and turned into animations using a process called interpolated rotoscoping. Many animators worked on the films, but to speed the process and create a smooth result, software created by MIT grad student Bob Sabiston was used that interpolated the images for frames between rotoscoped key frames.

The process is also used by animators to learn how to animate motion from scratch. But it's not just an animation tool. Rotoscoping is also used in live-action films.