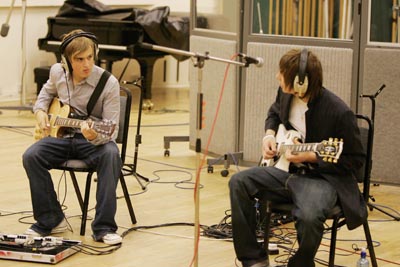 Most professional studios such as this one feature a separate room where musicians perform.
© Dave Hogan/Getty Images

If you're building a recording studio, you have plenty to consider, starting with the digital equipment you'll need for recording, editing, cutting and mixing music. To learn about some of the equipment you'll need for a functioning studio, read How Recording Sessions Work. Beyond that, you'll have soundproofing and acoustical concerns. And, depending on how much you're doing, you may want to consider construction or remodeling of the actual space.

A professional recording studio usually has a room where the musicians perform, sometimes itself called a studio; a control room containing the equipment for recording, editing and mixing music; and possibly a machine room and smaller rooms, or isolation booths, where high-volume instruments like drums are played to separate their sounds from those the microphones in the main room are picking up.

These rooms are carefully constructed to promote sound quality. That's been a concern for decades in the recording industry. Chess Studios in Chicago, for example, was one of the first in the 1950s to design a music studio with none of its four walls parallel (and several clipped in place) to allow desired vibrations.

You'll want to consider how you'll subdivide and soundproof your space. At the very least, you want to provide performers with a soundproofed space separate from the control room. And you'll want to check local zoning ordinances to make sure you comply with any anti-noise provisions.

You don't need a lot of equipment for a home recording studio. Here are two suggestions for putting together an economical digital system, one for under $1,000 and the other for $4,000:

Multi-track recorder -- Device that can be used to record audio onto more than one track and then mix the tracks into a stereo master recording. Can't record and edit MIDI data.

Sequencer -- Software that can be used to record digital audio and MIDI data and then mix the sounds together.