From Small to XL 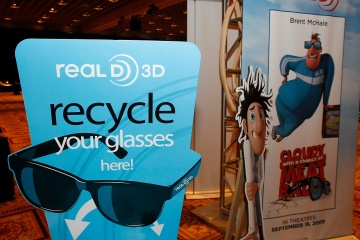 After your movie, you can toss your RealD glasses in a bin for recycling. Unless you want to take them home and bedazzle them.
© Ethan Miller/Getty Images

The initial RealD 3-D system that's equipped with first-generation ZScreen technology is also the most widespread 3-D projection system in the world, available in many thousands of theaters. This version does have some significant limitations, particularly in terms of the size of the screen on which it can project, specifically screens that measure 45 feet (13 meters) or less.

In 2008, RealD introduced a second-generation system called 3-D XL. True to its moniker, it works on extra-large screens up to 80 feet (24 meters) wide. The XL is designed to provide more than enough brightness for large screens, making for a bigger and ideally more immersive 3-D experience. Whether your theater uses the first RealD system or the XL, both work specifically with the company's 3-D glasses.

The glasses that you wear during a RealD feature film aren't your everyday polarized eyewear. If you tried to slip on your normal sunglasses during one of these flicks you'd miss out on the special effects (and likely upchuck your popcorn, too). The glasses also have some subtle refinements, such as low-glare frames to reduce scattered light that would distract you from the movie.

Each time you buy a ticket to a RealD movie, you receive a brand-spanking-new pair of 3-D glasses. The idea behind this is to provide the best possible clarity for your movie experience, but also to reduce the heebie jeebies you might feel about wearing glasses that other people have already used.

After each show, most theaters collect the glasses for recycling. Some people do keep their glasses for reuse, and others like them just as souvenirs.

Some industry insiders feel like those glasses should just gather dust for a while as the 3-D film industry recalibrates itself. Ticket sales for 3-D movies are sliding downward, and many pundits blame poor sales on overuse of the effect, in addition to poorly produced conversions of 2-D to 3-D, which often results in ugly, almost unwatchable films.

Movies that make full use of the potential of 3-D, such as 2009's "Avatar," were first imagined as multidimensional experiences. "Avatar" was directed and shot with 3-D in mind, and the superior results translated into massive ticket sales.

Whether 3-D will be around for many years is up for debate. What's certain is that companies like RealD will continue to innovate and refine the technology behind 3-D in the hopes that it will capture audience imaginations like no other cinema experience in history.

I rarely go to theaters to see movies, but I was one of the millions and millions of people who made time to watch "Avatar" on the big screen. It was worth it. "Avatar" wasn't just a movie. It was a sensory experience that made me wonder if it would change the way movies were made. Half a decade later, it seems as though the 3-D trend has overstayed its welcome. Too many 3-D movies are 3-D just for the gimmick instead of the story, and as we all know, it's the story that matters and not the technology. Perhaps more directors will put 3-D to intelligent use soon, or maybe 3-D will fade into obscurity for a few more years before the next generation of projection technology promises a permanent 3-D revolution ... again.